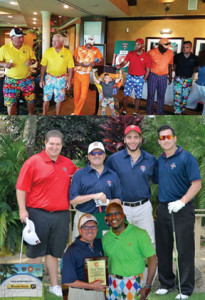 The Community took a big swing to benefit the Minority Builders Coalition, Inc.

“It was an honor to serve as the honorary chair for this year’s E. Pat Larkin Golf Tournament. Minority contractors far too often face inequitable market conditions that prevent them from succeeding and I want to be a part of finding ways to establish equity. I support the MBC and all of the support services that help minority contractors create jobs and serve their clients. This golf tournament brings together the entire construction industry to help support this cause,” stated Mayor Wayne Messam of the city of Miramar – this year’s Honorary Chair.

The Florida Panthers Foundation served as the event’s title sponsor. They were joined by the city of Miramar and the Corradino Group as Platinum sponsors. “The Florida Panthers and its new leadership are committed to being a valuable part of the community in which we operate. We are pleased to be a partner to the Minority Builders Coalition, and we look forward to continuing our support of local small and minority businesses in the future,” said Charlie Turrano, executive vice president of the Florida Panthers.

Many minority contractors, particularly Black contractors, seeking to sustain or grow their business in spite of obstacles like discrimination, etc. continue to count on MBC for its advocacy, education and access to projects. Also, nearly 700 seniors per year receive no-cost home repair services from MBC’s Home Touch Program. Furthermore, MBC continues to be one of Broward County’s leading providers of home rehabilitation and affordable housing for low/moderate income families.

Brian C. Johnson, president and CEO of Minority Builders Coalition, stated that “we wanted to raise funds to support our mission in a way that our friends and supporters could enjoy supporting us without even realizing how much they are helping. This was really more like a family reunion on the golf course and we are eternally grateful for everyone who supported us through this event”.

One hundred and twenty-eight players in total participated in the tournament. After golfing, an awards luncheon featured welcome addresses from Mayor Wayne Messam and others.

Prizes were given to players included first place, second place and third place team prizes, closest to the pin, and to the team with the worse score aka “the biggest loser” trophy.

A DAY OF SERVICE

This event kicks off the 100th Anniversary of Delta Sigma Theta Sorority, Inc

A contingent of Eta Nu brothers numbering in the thirties  traveled to Charlotte, NC to attend the 83rd Grand Conclave of the Omega Psi Phi Fraternity, Inc. Led by Basileus Terry Bruce Brown,  for the very first time since the chapter’s chartering in 1969, Eta Nu was named National Social Action Chapter of the Year, an honor, though long in coming, was accepted on behalf of the chapter and more specifically chapter and 7th District Social Action Chair Brother Melvin Davis by Region II Representative Lennox George with palpable, heartfelt humility. Having won the award numerous times on the state and district level, winning nationally places the chapter in a different stratosphere fraternally. You see, Social Action, one of Omega’s nationally mandated programs, has been a significant, meaningful and effective tool in Eta Nu’s impact on the citizens of Pompano Beach and Broward County. Programs like the Adoption Party in collaboration with Child Net, Diabetes and Sickle Cell Foundations, Christmas and Thanksgiving Basket giveaways, Voter Registration/Education initiative, Feeding the Homeless, Breast Cancer Awareness and Youth Mentoring/STEM Empowerment programs – among others – have propelled its community successes. […]