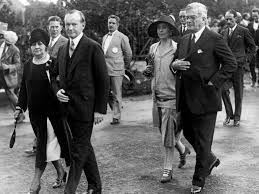 Air Force One touched down in Havana, Cuba, on Sunday, marking the first time a sitting U.S. president has visited the country since 1928. That year, Calvin Coolidge made the 100-mile, overnight journey from Key West to Havana aboard the World War I-era battleship the USS Texas.

The trip was a big deal at the time. It was the only international trip of Coolidge’s presidency, and his speech at the Pan American Conference, along with the speech of then-Cuban President Gerardo Machado, were broadcast live over the radio (though the transmission faced several technical hurdles and two transmission interruptions).

We dug back through our archives to see how The Washington Post covered the historic moment. Here are some of the highlights.

Before Coolidge arrived in Havana, Machado postponed the opening of the conference to declare a national holiday to honor Coolidge. The Post wrote that “all indications are that Cuba will celebrate its greatest fiesta in years” on the day of Coolidge’s arrival.

The grand entrance included a motorcade that rode through the city of Havana. And as it was in 1928, “the ladies” who disembarked from the ship were to all ride together in one car — a sight much different than that of President Obama stepping off of Air Force One with the first lady and his two daughters alongside him Sunday. The Cuban government went to great lengths to ensure Coolidge’s comfort. So much so that Machado “entirely refurnished and redecorated” a floor of the president’s mansion in Havana for Coolidge and his staff to stay in during their visit.

The radio broadcast of Machado’s address was “the first time that the people of the United States [had] been addressed by the chief magistrate of a foreign country by radio.” Coolidge’s radio address was the first time a U.S. president spoke “to his people from foreign shores.” Excerpt from “Address by Coolidge on Air This Morning,” from The Washington Post, Jan. 16, 1928.

Despite traveling abroad, Coolidge stuck to U.S. law. Prohibition was in place back home, so when he and the first lady were offered cocktails in Havana, “they both met the situation by ignoring on one occasion and by sticking to water on another.”