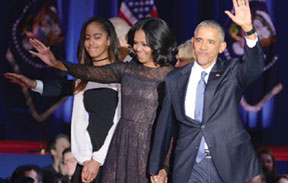 When President nominee Barack Obama won the election back in November 2008, the day was filled with hope as thousands of people from all walks of life clamored and screamed, “Yes, we can, yes, we can!” Obama had taken his supporters on a historical account of the experiences in the life of 106-year-old Ann Nixon Cooper in his acceptance speech. Before he finished, he had invited the nation on a new journey to correct the wrongs and change things for the better.

His election represented a dream realized and the hopes of many, but especially for future generations of Blacks. The number of people that came to support him far exceeded the capacity of Grant Park on that unseasonably warm November day. Similarly, the day he gave his farewell speech was warm for that time of year in Chicago and the supporters were filled with the same hope if not more, despite his looming departure from the office.

President Barack Obama returned home to Chicago in the final days of his presidency to deliver his national farewell address. He did so before a packed auditorium and cheering crowd at Chicago’s McCormick Place on January 10.

“So, I first came to Chicago when I was in my early twenties, and I was still trying to figure out who I was; still searching for a purpose to my life. And, it was in a neighborhood not far from here where I began working with church groups in the shadows of closed steel mills,” Obama said. “It was on these streets where I witnessed the power of faith and the quiet dignity of working people in the face of struggle and loss.”

During his speech—slightly longer than 50 minutes—Obama marked his accomplishments over the past eight years and thanked those present, as well as those who could not be present, for the support they offered.

Though the audience listened attentively, some were overwhelmed with emotions, knowing that they were witnessing Obama’s final public address as president.

“I was there when he was in Grant Park in 2008—that was when all of this started, and to see this all come full turn, it’s a lot to handle,” stated Maria McClain.

The president took time to return to the tone of his 2008 campaign and compared it to today. Specifically surrounding race relations, he observed there is still work to be done.

“After my election, there was talk of a post-racial America. And such a vision, however well intended, was never realistic,” Obama said. “Race remains a potent and often divisive force in our society. “If every economic issue is framed as a struggle between a hard-working, white middle class and an undeserving minority, then workers of all shades are going to be left fighting for scraps while the wealthy withdraw further into their private enclaves.”

Obama did contend that, even though race relations are frequently the subject of news headlines and are not good at the moment, they are better than they have been in the past.

“Now, I’ve lived long enough to know that race relations are better than they were 10 or 20 or 30 years ago, no matter what some folks say,” Obama said.

“You can see it not just in statistics. You see it in the attitudes of young Americans across the political spectrum. But, we’re not where we need to be. And all of us have more work to do.”

Obama even laid out what he believes will help alleviate the problems.

“And we have shown that our economy doesn’t have to be a zero-sum game. Last year, in-comes rose for all races, all age groups, for men and for wo-men,” Obama said. “So, if we’re going to be serious about race going forward, we need to uphold laws against discrimination—in hiring and in housing and in education and in the criminal justice system.”

The president also thanked Vice President Joe Biden for being “the first and best executive decision” he ever made, as well as his wife, Michelle. As they exited the stage, cheers of “Yes we can, yes we did!” could be heard throughout the auditorium.

“Michelle LaVaughn Robinson, girl of the South Side,” Obama said. “You took on a role you didn’t ask for. And you made it your own with grace and with grit and with style and good humor. You made the White House a place that belongs to everybody, and a new generation sets its sights higher because it has you as a role model.”

Among those expressing positive remarks was Congressman Elijah E. Cummings, representing Maryland’s 7th District. He noted that during his entire career in Congress, he had “never seen any president face the levels of obstruction that President Obama faced from congressional Republicans.”

In spite of that he said that Obama, in his farewell address, “exhibited the same poise and leadership he has exhibited since he was inaugurated in 2009.”

The Ford Motor Company has had a long track record of contributing to HBCUs that spans more than 30 years. Thus, it was noteworthy when Ford recently launched its “Drive-2Greatness” initiative to support science, technology, engineering, the arts, and mathematics (STEAM) programs at HBCUs. […]