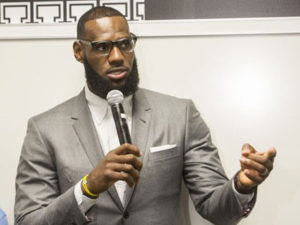 “I delivered the poor that cried, and the fatherless, and him that had none to help him.” Job 29:12

The “I Promise School” is more that an education institution: it is a place where children who attend can come hungry but leave full mentally and physically.  It is a school where uniforms are free, and where parents can get the help they need to find work or get their GED. It is a full-service education social agency. It is unique because poverty is a unique experience. How so?  Because while a great number of us has been in poverty, the experiences of our poverty is singular and distinct to each of us. In other words, we all suffered differently. Only someone who has been homeless, hungry, ever in want like LeBron James has been, understands that poverty is about more than needing money.

James, like a lot of our African American professional athletes, could keep making money and use it for himself and his family. But his spirit of childhood recall would not let him. He refused to be selfish. Just as his children were whole, he wants all children to be whole along with their families. We forget that there are children who spend the night hearing and watching domestic violence. Along with every imaginable kind of abuse. How can that child be expected to have a school mind the next morning?  His/her mind is filled with the sounds and undeletable optics from the night before.

James gets that and has responded in a way to those realities that almost guarantee a life change for those children in the most positive way possible.  I hope the school will be successful beyond all expectation.

Our comparison of the spirit of James to others only needs two people. One is the example Jesus Christ set. Jesus understood our lack of compassion for others. When He said the poor will always be with us, He was not declaring it so.  It was just Christ acknowledging our emotional detachment to the poor.

The other comparison is President Trump, who never met a moment that he didn’t want to turn into division and hatred.

Is LeBron James, the Next Great African-American Leader?

“If you don’t stand for something, then you’ll fall for anything.” I remember growing up and sitting in my room, watching sports, having my father barge in the door, and begin to tell me those […]

Dr. Boyce: Things that make LeBron James one of the great ones

LeBron was that he was going to be something very special in the NBA. […]