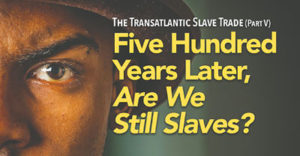 “However, it’s what that most famous preamble – and, indeed, the rest of the document – doesn’t address that’s more telling: The Constitution’s authors omit the vital distinction be-tween their view of the differences between persons and property and, in doing so, ultimately protect one of history’s most oppressive institutions: Slavery.”

The National Newspaper Publishers Association (NNPA) has launched a global news feature series on the history, contemporary realities and implications of the transatlantic slave trade. This is Part 5 in the ongoing series.

“I prefer to be true to myself, even at the hazard of incurring the ridicule of others. Rather than to be false, and to incur my own abhorrence.” — Frederick Douglass

“Ignorance is the greatest slave master in the universe… The greatest prison anyone can escape from is ignorance.” — Matshona Dhliwayo

“These negroes aren’t asking for no nation. They wanna crawl back on the plantation.”—Malcolm X

Five Centuries ago – on August 18, 1518 to be exact – the King of Spain, Charles I, issued a charter authorizing the transportation of slaves direct from Africa to the Americas, according to the United Nations Educational, Scientific and Cultural Organization, or UNESCO.

Some argue, however, that slavery continues to exist – in that far too many African Americans possess a slave’s mentality. Books on the topic are a plenty.

Harvard psychiatrist Alvin Poussaint wrote extensively about the high suicide rates among Black males which doubled over a 15-year period beginning in 1980. “African American young men may see the afterlife as a better place,” Poussaint wrote in his book, “Lay My Burden Down: Suicide and the Mental Health Crisis among African Americans.”

In her book, “Black Pain: It Just Looks Like We’re Not Hurting,” famed author and social worker, Terrie M. Williams, writes about the “high toll of hiding the pain associated with the Black experience” on mental health.

The Urban Dictionary and other works say that a slave mentality is one of feeling inferior or of feeling lost without hope, a feeling that we do not have the power to significantly alter our own circumstances

“Another sad symptom of having a slave mentality is believing that white people are superior,” writes Kuuleme T. Stephens noted in her blog. “A person conditioned to quietly, and without objection, accept harmful circumstances for themselves as the natural order of things. …They’re also conditioned to accept their master’s view and beliefs, about themselves, and strive to get others, within their group, to accept their master’s view.

“I often hear people make the claim that Blacks were better off when they were slaves. I myself have been known to say such things when people piss me off and respond out of ignorance to a posting or article. My reason for making such an argument is if black Americans are not going to stop living in the past and blaming other for their problems, we will never move forward as a people. …To maintain a belief that you are owed something and entitled to things when you are doing nothing to help yourself is absurd.

CONVICTED ON A LIE

Myles was convicted of first-degree murder after Morris testified in court that he killed Shaharian “Tony” Brandon during a robbery attempt in which Morris was present. Stuck in a revolving door of five public defenders, Myles didn’t have a chance to defend his freedom his attorneys say. […]

A wealth of unfair criticism for Obama

A wealth of unfair criticism for Obama
[…]