The Westside Gazette Newspaper is honored to feature these editorial contributions made by local students. 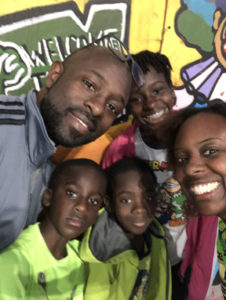 This Sunday, I had a wonderful experience at the UniverSoul Circus at the Miramar Regional Park. Honestly, this was unexpected because I didn’t think I would enjoy it. In fact, I thought the circus would be boring, but this was no ordinary circus. Before entering, my family took a few pictures in front of a picture display, and as soon as we sat down, the show began. The first act of the show began with Caribbean dancers and stilt walkers partying away. Some of my favorite acts of the show were the children with dogs performing tricks because it was adorable. I also enjoyed a young lady, who limboed under bars of fire! We also saw many people doing stunts blindfolded, which scared me the most because they could fall and get hurt. There were trained camels, horses, zebras and many other animals that were doing tricks as well.

There was another circus act, where a man had no safety net and was really high above the ground! There were, of course clowns, which were amazing because they were dancing and being silly. The most thrilling part of the circus was probably the motorcycles. There were guys on motorcycles, jumping from extreme heights in the air, onto a platform, which was crazy. Believe it or not, the most shocking part for me was the praise dancers towards the end of the

show! I would have never thought in a million years that a worship service would break out at a circus! I probably enjoyed this the most because I am a praise dancer, and this was the perfect way to end the show.

In conclusion, the UniverSoul Circus was amazing, and I think it is good to have because not only were the acts diverse, but so were the performers. This is a great event for the family to attend, especially during Black History Month. If you haven’t gone yet, then I would strongly recommend that you do it before the final show in Miramar, which is on February 23.

The Westside Gazette Newspaper is honored to feature these contributions made by local students. […]

Over the past three years, I’ve fallen in love with Chili’s Southwestern Egg-rolls. They are a warm, chewy, and delicious appetizer . Since I cannot always go to Chili’s, I decided that I wanted to try to make the egg-rolls on my own, and let me tell you, it was a DISASTER!! […]

The Westside Gazette Newspaper is honored to feature these contributions made by local students. […]