New Delhi — “The Crown,” Netflix’s hit series about the British royal family, has garnered a cult following among Indian viewers, among the  2.8 million Netflix subscribers in the country.

Audience demand for the show is 15.3 times greater than for other average television series in India in the last 30 days. Only, 2.7 percent of all shows in the Indian market reach this level of demand.

While the show is an entertaining and engaging docu-drama, it distills events of monumental historical significance to how they affected or were influenced by the private life and interests of Queen Elizabeth II.

The show washes over the discrimination of British rule, presenting the period in a glamorous soap-opera sort of way with a high entertainment value.

Though some Indian viewers have pointed out facts about the devastation during colonial rule, they remain loyal viewers of the show.

“There were chapters in Indian textbooks that taught us the benefits of the British Raj,” said Aditya Mukherjee, a historian and a professor at Jawaharlal Nehru University in New Delhi. “Colonialism kills your dignity and you begin to admire someone else. The countries which ruled us remain rich and advanced, so there is a double attraction towards such shows.”

Mukherjee believes that Indian society was heavily influenced by the British during their 200-year rule, the remnants of which will take a long time to completely relinquish. 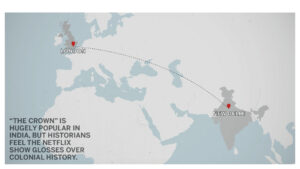 Several important names associated with India’s history are showcased on “The Crown,” but their historical significance is not presented in depth in the grand production. For instance, Lord Louis Mountbatten, the former viceroy of colonial India, was responsible for the partition of India and Pakistan that resulted in the loss of millions of lives. However, his character in the series focuses on his relationship to the young Prince Charles, and ultimately on his assassination. Mountbatten was an uncle of the queen’s husband, Prince Philip, and a distant cousin of the queen.

The show opens with the wedding scene of Elizabeth and Philip in 1947. During the ceremony, Winston Churchill, the former prime minister of Britain, talks to his wife about how the marriage was “engineered” by Mountbatten. Churchill then goes on to say that Mountbatten was “the man who gave up India.”

Mukherjee said that the glamorous life of the royal family depicted in the series entertains the Indian crowd since there is an economic aspect associated with it.

“Even though many other countries have overshot Britain economically, the Britishers left behind a royal model in their colonies which continue to entice us,” he said.

Britain is said to have “robbed” India of an estimated $45 trillion between 1765 and 1938. Even after 70 years of independence, India is still an emerging and developing nation. This may play a role in the psyche of the Indian audience who tend to look up to the wealthy displays of the royal family.

“Things that are out of our everyday common lives always have an attraction to take us,” said Charu Gupta, a history professor at Delhi University. “Any depiction of royalty attracts us since it is outside the common everyday life but has a historical significance attached to it.”

Gupta is of the view that the depiction of the opulence and expansiveness of the monarchy, particularly the British Empire, attract a lot of nations, including the decolonized ones.

In the docu-drama, where the focus is clearly on the royal family throughout decades of Queen Elizabeth II’s reign, major historical events devolve into family feuds and struggles in the lives of the characters aspiring to be closer to the throne. Churchill’s role in the Bengal Famine of 1943 and his wartime policies are not revealed, but then, “The Crown” is only peripherally about him.

“The context of the show remains about the life of the queen,” said Ajit Duara, a TV and film critic. “It’s a drama series which leaves out the historical significance maybe because the plot is just about the royal family.”

Duara said the show is a fictional drama about Queen Elizabeth’s life.

“Since the production value remains good and the cast of British-era themed shows have A-list actors, the overall effect of the drama and the story makes it an entertaining watch. This explains the high demand.”