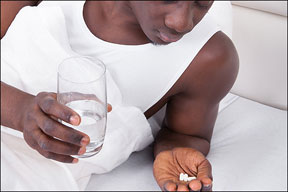 To PrEP or not to PrEP, that is the question

It seems to me that it’s only fitting that on the eve of the Black AIDS Institute’s 15th anniversary, the CDC has released guidelines for the implementation of pre-exposure prophylaxis for HIV, or PrEP.

PrEP and treatment as prevention are the scientific break-throughs of this era. PrEP, while not for everyone (and probably not for anyone all of the time), is a critical addition to the anti-HIV/AIDS toolbox.

When properly administer-ed, PrEP makes it almost impossible to acquire HIV, even if you are exposed to it. The math is simple: you stop transmission, you stop acquisition and you break the back of the epidemic. If our goal is to end the AIDS epidemic, then we need as many tools in the toolbox as possible.

Certainly there are critics of PrEP, and quite frankly that’s a good thing; critique is vital. One of the critics’ concerns is that if people start using PrEP, they will stop using condoms. That might be. But if we are brutally honest, among many people who are most at risk for HIV, we have already lost the condom battle. It doesn’t mean that we should stop the fight. It doesn’t mean we should pull back from a message of PrEP and condoms. In fact, it doesn’t have to be either PrEP or condoms. It does mean that having more options that work for more people moves the needle for-ward.

I was one of those people who during the mid-1980s was opposed to HIV testing. My position was that since we didn’t have treatment and the stigma at the time was pervasive, if people found out their HIV status they would commit suicide. It was about fear. I was wrong. Knowing your HIV status was very important then and it’s very important now.

When Gardasil came on the market, the critics said if you provided vaccines to teenagers that would inoculate them against STDs, it would give them a license to be promiscuous. They were also wrong. But even if they were not, the benefits of preventing young women from developing cervical cancer out-weighs the risk of early onset of sexual activity.

As we have been doing with breaking science for 15 years, the Black AIDS Institute is disseminating information about PrEP, we are offering training and capacity building, we are looking at policy (including the CDC guidelines), and we are providing PrEP mobilization advocacy from a uniquely and unapologetically Black point of view.

Phill Wilson is the president and CEO of The Black AIDS Institute, the only national HIV/AIDS think tank in the United States focused exclusively on Black people. Follow him on Twitter @iamphillwilson. Wilson is also available for interviews and press inquiries. Contact (213) 353-3610, ext. 105, or PhillWilson@BlackAIDS.org.