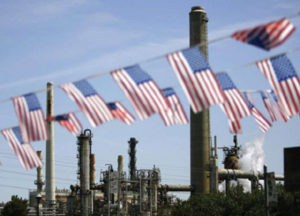 The Trump administration is working to slow down the implementation of a major international environmental regulation that’s set to take effect in 2020. The administration hopes that the effort will ease the compliance burden on businesses by phasing in the rules gradually, rather than all at once.

Counterintuitively, phasing in the regulation could raise costs on American consumers, rather than reduce costs as the administration intends. It’s smarter to let the rules go into effect as scheduled.

The regulation was issued years ago by the International Maritime Organization, which regulates global shipping. The rules will require ships to use fuel containing no more than 0.5 percent sulfur — a compound which causes acid rain and exacerbates people’s breathing problems. That’s a steep drop from the current global limit of 3.5 percent sulfur.

The Trump administration fears the regulation will cause demand for diesel, heating oil, and other low-sulfur fuels to surge, resulting in “precipitous fuel cost increases on consumers.” It also worries that shipping companies will abruptly raise prices on imported goods to offset their higher fuel costs.

Fortunately, these sudden price hikes aren’t likely. The oil industry has known about the regulation, commonly called IMO 2020, for roughly a decade.

Petroleum companies have already upgraded their refineries to meet the coming demand for low-sulfur fuels. A recent report from the U.S. Energy Information Administration suggests that, if the new rules are implemented as planned, there will be minimal effects on domestic fuel prices.

Similarly, a report commissioned by the IMO concluded that “the refinery industry can produce sufficient amounts of marine fuels of the required quality…while at the same time supplying other sectors with the petroleum products they require.”

Meanwhile, the shipping industry has prepared by installing sulfur “scrubbers” on its vessels. These devices capture sulfur emissions, thereby enabling ships to adhere to the regulation despite using higher-sulfur fuels. Commodities trading company Trafigura has already equipped all 32 of its ships with scrubbers.

In other words, the free market is working. Companies had plenty of advanced warning about the new regulations, and they proactively adapted to prevent any market distortions.

Phasing in the rules would create uncertainty for these industries. The administration hasn’t even clarified how long it wants to stall the rollout.

Even if the administration releases a more specific phase-in timeline, refineries would still be forced to estimate how this piecemeal approach affects global demand for low-sulfur fuels. This guesswork could cause refineries to produce too little low-sulfur fuel, thereby leading to shortages. Ironically, such shortages would result in higher prices for the very consumers the administration intends to help.

IMO 2020 also won’t push up the price of imported goods. The United States already imposes a more stringent 0.1 percent sulfur cap on all ships that come within 200 miles of our shores. So a 0.5-percent limit will have little impact on American consumers.

IMO 2020 will take effect sooner or later — there’s no way to delay it entirely. The only question is whether the administration disrupts a decade’s worth of planning by the oil and shipping industries, unintentionally harming American consumers in the process.

George Landrith is president of Frontiers of Freedom, a public policy think tank. This piece originally ran in the Houston Chronicle.