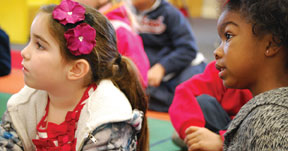 The study was done by Sean Reardon of Stanford University and Ximena Portilla with MDRC, a nonprofit research organization. Since 1998, poor students have closed the gap by one month; wealthy children are now eight months ahead of poor students. The study also showed that gaps among races are also narrowing when it comes to kindergarten pre-paredness. Compared to white children, Black and Latino children are better prepared for kindergarten.

Why they are doing better

Although the study did not examine the reasons for improvement among low-income children, researchers believe the reasons could be:

#1 – Because parents are spending more time reading to their children; or

#2 – Because there are more pre-school opportunities available for low-income children compared to in the past.

Either way, it is good news for low-income children and their parents. It also demonstrates increased awareness regarding the importance of kindergarten and early childhood learning on a child’s entire education.