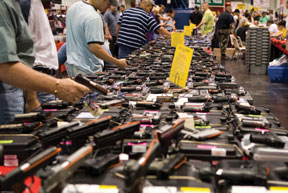 WASHINGTON, D.C. (NNPA) — The United Nations Human Rights Committee has given the U.S. a series of failing grades on human rights, including failing to meet international human rights standards on gun violence; the uneven implementation of controversial Stand Your Ground laws; violating personal privacy; and doing a poor job of caring for victims of gun violence.

“We have such easy access to guns, instruments that can easily take a human’s life. Gun violence, and the way it plays out, especially around Stand Your Ground laws, has disproportionately impacted people of color… particularly Black communities. In some places, it’s easier to buy a gun than a fresh vegetable,” said Ejim Dike, executive director of the U.S. Human Rights Network, a national network of organizations working on a variety of human rights issues in the United States.

She continued, “Under human rights law, if you find that a specific policy has the result of impacting a specific community disproportionally… if you find that Stand Your Ground law is resulting in people of color losing their lives… there is the responsibility of the government to do something.”

The UN HRC is a multi-national, neutral group of experts who monitor compliance with the International Covenant on Civil and Political Rights (ICCPR) treaty. There are only 22 nations that haven’t signed it – the United States did so in 1977 and ratified it in 1992.

According to a national report from the American Bar Association (http://www.abajournal.com/files/GunReport.pdf), self defense-related homicides – and particularly, less common interracial homicides – have spiked in the 33 states that have Stand Your Ground laws. And Blacks, Latinos, and Native Americans are most likely to be the ones staring down the barrel of a gun as lax gun laws provide near-immunity to the shooter.

In February 2014, Michael Dunn, who fired into an SUV full of young Black men, killing 17-year-old Jordan Davis, used the Stand Your Ground defense during his trial. Seven months prior, George Zimmerman employed it and was found not guilty of all charges associated with stalking and killing 17-year-old Trayvon Martin. Both of the shooters are non-Black.

In May 2012, Marissa Alexander, an African American, was charged with aggravated assault for firing a warning shot at her estranged abusive husband; prosecutors successfully argued that the Stand Your Ground defense she sought did not apply in her case.

At the urging of grassroots human rights activists in the wake of Zimmerman’s acquittal, the UN committee examined gun violence and SYG laws as one of four American controversies that might be violations of the ICCPR. Dike’s organization brought together several grassroots groups to write reports on gun violence for the committee; in March 2014, representatives from three of the groups traveled to Geneva to testify at the committee’s hearing.

“The human rights community also pays attention to disparate effects of these laws,” said Meena Jagannath, who testified in Geneva and is the co-founder of the Florida-based Community Justice Project, Inc.

“In our reports, we tried to highlight that there are strong interest groups that have been behind the proliferation of these laws. We’ve also strongly emphasized that SYG laws disproportionately impact Black and Brown communities because of inherent racism in the U.S. justice system, and because they allow for people to use deadly force based on their subjective fears.”

The committee issued the grades on July 30.

Unfortunately, the report is unlikely to lead to government action. The United States has attached “reservations” – or, conditions and exceptions – to most of the UN treaties it has signed.

“One reservation is that the treaty is not self-executing. What that means is, unless Congress passes an additional law to make this human rights treaty the law of the land, the United States government is saying we don’t recognize [the treaty]. So in many ways, the ratification becomes somewhat symbolic,” Dike explained.

An 1884 Supreme Court decision gave Congressional laws priority over treaties, even when they contradict. Additionally, the U.S. is a rare industrialized nation that doesn’t have a national, independent human rights institution to hold the government accountable.

On top of the challenge of curbing illegal guns, SYG and gun laws are fiercely protected states rights – seeking to repeal or regulate them would be an uphill battle for any elected official.

“It comes down to political will. There has to be some leadership taken around the issues of gun violence. Whether it’s regulation, whether it’s tying federal funding to different kinds of gun laws, there needs to be a limit somewhere,” Jagannath stated.

“We cannot help but consider that the lack of political will to address gun violence and Stand Your Ground issues is directly linked to the fact that these issues disparately impact black and brown communities and therefore are not political priorities.”

While the Committee cannot issue penalties or orders, its report can serve to bolster citizen efforts.

“It quantifies how much effort the U.S. is actually putting forward in trying to address some of the [issues],” said Jagannath, adding that the “C1” grade essentially means the government has done nothing. “Report cards have a sort of visceral – it touches a nerve…everyone wants good grades. To have a report card of the U.S. that is really sub-standard and mediocre…problematizes the image the U.S. tries to put forward.”

Dike agreed that the hit to American image is important, explaining that “the United States sees itself as the human rights champion of the world.” And in light of the history and global perception of Black American movements, she is confident that a human rights-based strategy is the path to justice.

“People look at the Civil Rights Movement around the world…it continues to be a shining example,” she said, adding that the movement would have been a human rights movement, but for government sabotage.

Dike concluded, “Despite civil rights laws, we have racial disparity in almost every sphere of life… and people of African descent as the worst indicator. So obviously, our civil rights laws have not been enough. When you have these human rights violations, you need the global community to come together and condemn the United States.”

N.C. court to decide the fate of Voting Rights for Blacks

N.C. court to decide the fate of Voting Rights for Blacks
[…]

Republicans use cruelty as a political weapon

Republicans use cruelty as a political weapon
[…]

Voting Rights Activists speak on the aftermath of the 2016 Elections

Voting Rights Activists speak on the aftermath of the 2016 Elections