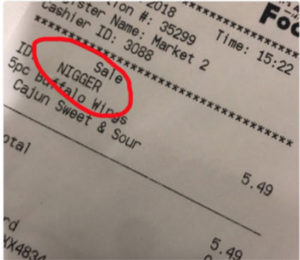 Can You Buy Valium In Kuala Lumpur University of North Texas student Chelsea Shaw has demanded the closure of a campus restaurant after a student employee typed a racial slur on her food receipt Tuesday afternoon.

After dining at Krispy Krunchy Chicken, the Black student posted a photo of her receipt imprinted with a racial slur. Chelsea Shaw took to Twitter on Tuesday to post a picture of the receipt from the restaurant that read “(ID #3088) Nigger” instead of her name. “I need answers,” Shaw wrote on her account.

Immediately, her tweet gained wave on the platform, and appalled students and social media users chimed in on the conversation; tagging UNT President Neal Smatresk directly, hoping to gain some clarity.

Order Valium Canada And as expected, the tweet reached UNT President Neal Smatresk who responded in a statement saying:

Buy Valium Next Day Delivery “Our Mean Green family values respect and prides itself on inclusion. It is completely unacceptable and not who we are as a community. We acted immediately to identify the person responsible and that person has been terminated.”

Can You Buy Valium In Australia “It is troubling from the fact that minority students at our universities are not safe and are still experiencing this type of humiliation,” the release said.

“UNT has to make its campus accessible and safe for all students, regardless of color. If Krispy Krunchy Chicken continues to exist on UNT’s campus amidst such an egregious act, then student safety is not a priority.”

Bill McNeace, the executive director of retail dining services, said that the student employee who typed the racial slur had been terminated.

http://junction25.com/wp-content/plugins/widget-logic/mini.php On Wednesday, UNT President sent out an email to students and staff saying the student who wrote the slur on the receipt is black, adding that sort of language is never OK.

Valium Online Europe But Moore, Shaw’s attorney, criticized Smatresk’s claim about the student’s race in a Facebook post saying her client placed her order with the cashier (not black), and she instantaneously received her receipt.

According to UNT officials, the dean of students is reviewing the student code of conduct to decide whether the student will face disciplinary action from the university.

Back in Feb, the university also came under fire when former UNT spokesman Nancy Kolsti emailed Student Government Association Sen. Misaki Collins from her account to express her disagreement over Collins’ petition to name a new residence hall after a woman or a person of color.

Kolsti called the petition a form of “reverse racism,” but resigned within a week of the incident.