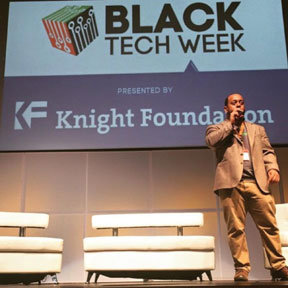 MIAMI, FL – The second annual Black Tech Week connects entrepreneurs with the people and tools they need to increase the number of startups that are founded by people of color and connect them with the resources to scale, deliver solutions for stronger partnerships, training and  expand the technology blueprint and access to VC funding in the Black community. The weeklong series of events will be held during Black History Month, Feb. 15-20, 2016 at various locations around Miami provides impactful programming centered on innovation, technology and creativity. Black Tech Week includes interactive workshops for idea exchange, the Power Moves Early Stage and Series A Startup Boot-camps, a 3 Day Technology and Startup Conference, Women’s Innovation Brunch, Walker Legacy’s Women in Tech events, Pitch Competitions and VC Mentor Sessions. Attendees can register at http://blacktechweek.com/.

Black Tech Week is the premier pipeline in South Florida for people of color, to have access to key global players of color in the tech industry. The visionaries behind the conference are Derick Pearson and Felecia Hatcher who are also the founders of the Miami-based, Code Fever. Their commitment to training African-American and Caribbean youth and adults in the areas of technology and entrepreneurship through full stack development coding boot camps, in school programs is unmatched.

“The second annual Black Tech Week is a jammed packed  week during Black history month dedicated to getting our community all the resources we need to move our community forward in the innovation economy, states Felecia Hatcher. This year we are excited to partner with the Knight Foundation, Florida International University, Simkins Foundation, Baptist Health, Power Moves and Walker’s Legacy to celebrate entrepreneurs, innovators and technologist in our community and across the globe”.

The Knight Foundation has been an essential supporter to the long-term success of a more diverse and inclusive tech eco-system. Their unwavering commitment to position Miami’s diversity and increasing inclusion in the tech and entrepreneurial space has been key to the blue-print of Black Tech Week and the working partnership with Code Fever.

Code Fever is committed to closing the technology education gap among-low-income and underserved youth in South Florida. During Black Tech week, a series of hour-long Black Tech Hour workshops will be conducted at area schools and community organizations. Designed to empower and encourage minority youth to learn and consider careers in technology at a young age.

Code Fever is a nonprofit committed to getting our communities up to code.  The mission of Code Fever is to inspire more underserved minority students between the ages of 13 to 21 to code, build and create technology enterprises within their communities, close the gap in technology education, and become leaders in STEM fields by increasing the number of young startup founders. For more, visit www.CodeFeverMiami.com

Many students fail to profit from for-profit colleges

Many students fail to profit from for-profit colleges
[…]