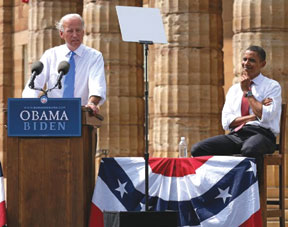 Biden continues to take center stage on violence against women.

WASHINGTON, D.C. (NNPA) – In July, bystander footage of an unidentified California highway patrol officer pummeling a Black woman on the side of the road hit the media. Last week, federal judge Mark Fuller was arrested for beating his wife, and subsequently accepted a plea deal for professional leave, six months of counseling, no charges, and an expunged record.

And controversy continues after video surfaced of NFL Baltimore Ravens running back, Ray Rice, knocking his wife unconscious in an elevator last Valentine’s Day. The 2014 Miss America pageant stirred that pot over the weekend, when a judge asked a contestant about Janay Rice’s decision to remain in her marriage.

On the 20th anniversary of the Violence Against Women Act (VAWA), it seems there is still work to be done.

For this reason, Vice President Joe Biden, who co-sponsored the law in 1990 as a senator from Delaware, will convene legal scholars and professionals, and Department of Justice officials for a Summit on Civil Rights and Equal Protections for Women. No date has been set.

President Bill Clinton signed the bill into law on September 13, 1994.

Summit participants will brainstorm solutions to end the gender bias in the justice system that affects the way cases are handled. They will also examine ways to allow survivors to sue their assailants in federal court – a VAWA provision the Supreme Court struck down in 2000.

In addition to the summit, the Vice President’s Office released a state-of-affairs report on the issue of violence against women.

“When VAWA was first passed, almost every state crime involving interstate elements (from gun crimes to cattle rust-ling) was covered by the federal criminal code – but not sexual assault and domestic violence,” the report reads. “Although there is still much to do, this anniversary gives us a moment to reflect on the vital, often life-saving work the Violence Against Women Act has inspired and supports. Since its passage 20 years ago, help has come on all fronts.”

According to the report there has been significant traction, both culturally and legally, on the issue.

The national rate of intimate partner violence against women has fallen 64 percent between 1993 and 2012, or 61 percent for Black Americans alone, according to the Bureau of Justice Statistics. VAWA-funded organizations have made gains in prosecution, and more services have become available for more survivors.

Today, VAWA has been expanded to serve LGBT survivors, those living in Indian country, undocumented immigrants, and college students. In 2000, the definition of dating violence was added to the law. In 2005, healthcare organizations received VAWA funding to offer long-term mental and physical care for survivors.

But there are still lingering issues.

As Biden highlighted at a commemoration ceremony last week: “We have so much more to do, because there’s still sex bias that remains in the American criminal justice system in dealing with rape – stereotypes like she deserved it, she wore a short skirt still taint prosecutions for rape and domestic violence.”

Additionally, against women and dating violence are problems among youth; researchers have found that 1 in 10 teens will be harmed by someone they are dating, and 1 in 5 young women will be sexually assaulted during college. Until 2009, women age 18 to 24 have had the highest rates of being victimized by intimate partners—currently, women age 25 to 34 have the highest rates.

The White House Task Force to Protect Students from Sexual Assault was launched in response at the beginning of this year. Its mission is to increase research and prevention, improve schools’ response to sexual assault, and to increase transparency on government enforcement.

There’s also the contention that VAWA itself doesn’t have much power it is largely a federal grant program to help public entities do a better job of serving survivors, and support private entities that are already working around this issue. (The law also directs federal agencies to carry out already-existing laws and regulations).

Biden and proponents believe that in light of uneven law enforcement and judicial response at the state and local level, VAWA should be allowed to grant the federal government jurisdiction to enforce the equal protection clause of the Fourteenth Amendment. Additionally, other crimes involving interstate elements can be tried in federal court—this is not true for sexual assault and intimate partner violence.

In other words, survivors whose attackers have stalked them across state lines, or abused wives whose husbands have forced them to move away from support systems, or people who have been victimized via the Internet, must rely on state courts for justice. If they do not have a paper trail on their abuse along the way, it may be difficult to get a conviction for ongoing victimization, instead of a conviction for one incident in that state.

Since the 1970s, other legal figures and elected officials have argued that granting such jurisdictional powers would be to drag the federal government into “family disputes,” or overstep state rights.

In the meantime, the Obama Administration continues to produce campaigns, initiatives, federal guidance, and public resources to help eradicate violence against women.

“On the anniversary of this landmark legislation, we rededicate ourselves to strengthening the protections it first codified, and we reaffirm the basic human right to be free from violence and abuse,” President Obama wrote in a commemorative proclamation. “Too many women continue to live in fear in their own homes, too many victims still know the pain of abuse, and too many families have had to mourn the loss of their loved ones. It has to end—because even one is too many.”