The Orange Bowl saw the number 9 ranked Gators take on the 24th ranked Virginia Cavaliers. Walking into Hard Rock Stadium felt like walking into Ben Hill Griffin Stadium in Gainesville, feeling as if this was a home for the Gators instead of a neutral site. With Gainesville being roughly 5 hours away, many fans turned out to support their team in this championship game. With roughly 70% gator fans in the crowd, this was an uphill battle for Virginia from the opening kickoff. With thousands of Gator fans roaring would the Cavaliers be gator bait? 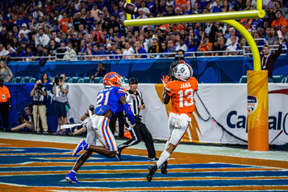 It seemed like Virginia was ready for the challenge. Florida scored first but Virginia answered back. The running game was excellent for Florida with Lamical Perine rushing for 138 yards on 13 carries and two touchdowns. The passing game was not as effective as the running game, although Kyle Trask passed for 305 yards, throwing 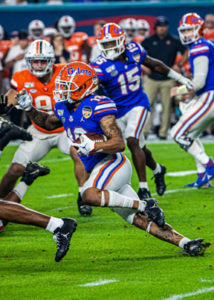 for one touchdown and an interception while completing 24 of 39 passes. Virginia had to rely on their passing game as their running game utilizing three running backs rushed for 52 yards combined with no touchdowns. The Cavaliers decided to rely on their quarterback’s arm to carry them to victory. Bryce Perkins was their quarterback who had an impressive game completing 28 of 40 passes (70%) with 323 yards and four touchdowns and one interception. When the Gators scored, he would answer back and tie the game or cut down on the lead. Virginia wasn’t going down without a fight, as they were only down 24 to 14 at halftime.

In the third quarter, Virginia’s defense was able to hold Florida to three points, but their offense didn’t score any points. In the fourth Virginia made their comeback too little too late, missing some opportunities 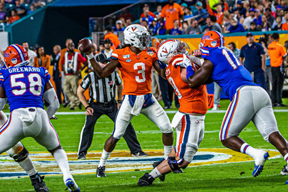 even though they outscored the Gators 14 to 9.  Final score was 36 to 28, with the Gators getting the victory. In the end, the offense couldn’t score when it needed to against a tough defense. Florida made it tough to run the ball, and all the pressure was put on Bryce Perkins’ shoulders. In the final analysis, it wasn’t enough to leave with the win. With this being the Gators third bowl victory in a row, (2017 Outback Bowl, 2018 Peach Bowl) Florida has their eyes on competing for another bowl next season.