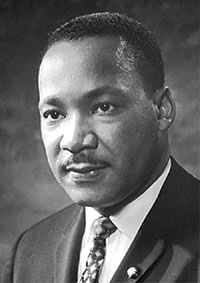 By Don Valentine and Nicole Nutting

He Said: Dr King is looking down with disgust at the evolution of his dream, from the ascension of a Black president to the current charade of a presidency. From the words of Dr. King, my Alpha frat brother is not happy in heaven! Even with the trials and tribulations our president is giving us,

I would quote from the hymn “I know someday we will overcome.”

Trump notwithstanding, Dr. King would say “I STILL HAVE A DREAM THAT ONE DAY THIS NATION WILL RISE UP AND LIVE OUT THE TRUE MEANING OF IT’S CREED.” Nicole and readers, don’t give up hope!

She Said: Without a doubt he would be appalled, as are all caring people. Given the elevation of racism with this administration I think he would have some choice words, especially for the hypocritical White evangelicals. How can you vow to love your brother and not blink when immigrant children die in U..S detention separated from their parents? [How Dare You!]

Dr. King would be proud of the new generation of vocal activists like Congresswoman Ocasio-Cortez. You know she had the spine to buck the “old boy” trend and use the Congressional right to march into the Senate to look for Mitch McConnell. No fear–Dr. King’s legacy lives on in our young leaders!

He Said: I am also certain that Dr. King would have taken a lunch with Speaker Pelosi. He would have told her to stand strong. Dr. King was prescient when he spoke then of what is happening now. Nicole, this is a quote from his “I have been to the mountaintop” speech: “ The world is all messed up. The nation is sick, confusion is all around, but I know only when it is dark can you see the light.” The country will survive Trump!