Well, it didn’t take long for everyone to realize the Miami Hurricanes weren’t going to the College Football Playoff.

Inside of Hard Rock Stadium, the No. 10 Miami Hurricanes got defeated by the No. 23 Florida State Seminoles 20-19. Between the two hated rivals, Florida State came away with their seventh straight win, which is the longest active streak between the two teams.

For the Seminoles, this win turns their entire season around. Florida State still wants to play in a major bowl game and they’ve got Clemson and Florida remaining on their schedule. Their win against Miami could propel them into having a great finish to the rest of the year.

As for Miami, our beloved Hurricanes ruined a perfect opportunity to enter into the discussion of the College Football Playoff. Miami would’ve had a legit win over a top 25 team in college football. It also would’ve given them with a huge edge psychologically knowing they beat their arch rival. 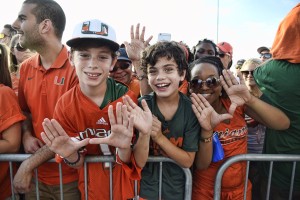 It also would’ve been the first signature win in the career of Brad Kaaya. As a junior, Kaaya hasn’t had many memorable games up to date. His last performance against Florida State would’ve been one of his best. Kaaya was especially impressive when it came to the last drive of the game. The quarterback came up big in the clutch.

The score was 20-13 with Miami losing the contest. With 1 minute and 46 seconds remaining on the clock in the fourth quarter, the Hurricanes offense stepped up. On a 4th and five on the 11 yard line, Miami quarterback Brad Kaaya found Stacy Coley with a gorgeous throw in the corner of the endzone.

The game was then presumed to get tied up at 20. That was until kicker Michael Badgley’s kick got blocked. 20-19 and the Hurricanes lost the game.

This loss to Florida State doesn’t and shouldn’t change the opinion about the Hurricanes. With the quick 4-0 start, everyone thought hat the Hurricanes were back. Let’s just say that there not wrong for thinking that.

A one point loss because of a blocked PAT isn’t anything to hold the head down. It adds more drama and makes a thicker plot for when the next Miami – Florida State rematch will occur. Either way, the Hurricanes are back, and this team is a legit top 25 team in college football.

Miami Hurricanes: So Far Are You Bearish or Bullish On Their Season?

Sink or swim, fight or flight. Those are the two options that occur when fear starts to sink in. At one point during the game against Florida Atlantic University, Miami Hurricanes fans were sweating from […]

If there’s one thing that people love about sports its the fact that no matter the odds, you don’t quit. What if the Miami Heat had quit when they were down 3-2 to the San […]

A basketball city. Those were the three words that Miami Heat majority owner Micky Arison declared the city of Miami. We all know that basketball in South Florida revolves around the Miami Heat but there’s […]