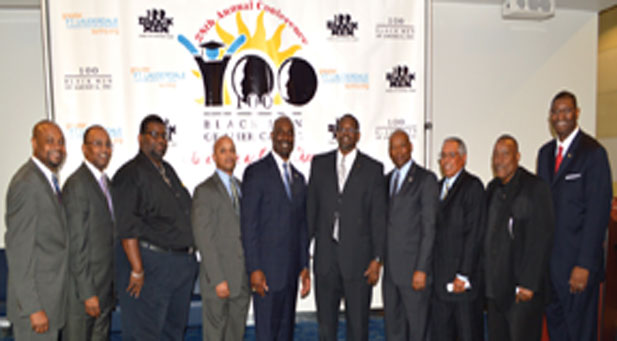 The announcement to unveil the project occurred during a press conference luncheon last week at Nova Southeastern University’s Don Taft University Center, in Davie, Fla. Although plans outlining the project revealed that the program initially targeted a specific segment of students deemed at risk academically, the mentoring tracking program will be accessible to all mentoring pro-grams recognized by the Broward Public Schools System.

A delegation of The 100 Black Men of America’s (100 BMOA) top brass attended the luncheon in a show of support of the local BMOA local chapter’s education initiative. The local initiative coincides with the theme of the 100 BMOA National 28th Annual National Conference entitled,” Education in an Era of Change: Ensuring Excellence for African American Youth.” The conference is scheduled for June 12-15, 2014 at the Westin in Holly-wood, Fla.

“I’m really excited about the participation we had here today from the Fort Lauderdale Community and particularly the support that we’ve gotten from the Greater Fort Lauderdale Convention and Visitor’s Bureau, as well as Nova Southeastern University for their partnership to help make this event happen and a successful one, said Curley M. Dossman, Jr., chairman of The 100 BMOA, Inc.

“We want the community to know that we’re all about serving young people and helping them to achieve their career and educational goals. We also want people to know that our workshops are targeted to needs of kids ages eight to 18.

We’re here to support the local chapter we have here in Fort Lauderdale, to help them expand their impact to join in the partnership with the school system and their superintendent, with the school board with the new initiative that they have around the conference program as well as supporting the tracking system that we know is very important that we demonstrate evidence based outcome of what we do.

“We believe these partner-ships with the school system will help lead to the success of the children in this community to the extent that the 100’s membership and particularly this local chapter will help participate and to advance those outcomes and goals we’re delighted to do that and support them in that context,” added Dossman.

Michael J. Brown,  president of the 100 BMOA, Inc., weighed in on his impressions of the work that is being done locally by 100 Black Men of Greater Fort Lauderdale and how the new initiative would impact the lives of young people in Broward County.

Dennis Wright, president of the 100 Black Men of Greater Fort Lauderdale provided the brain trust behind the mentoring tracking program and is spearheading the effort to implement the project.

“The take away here is to publicly announce the partner-ship between the 100 Black Men of Greater Fort Lauder-dale, the Broward County Public School System, and Nova Southeastern University to work collectively to make sure we enhance the educational opportunities for the young people in our school system and in our community.

“We hope that the outcome of this event today is that we get people from within our community to get involved-organizations, corporations, and those that can come in and have a positive impact in what we’re trying to accomplish. We’re hoping that they come on out and get on board to make this a win, win situation for all involved-most importantly our young people..”

“The big thing that I’m taking away from today’s event is the local impact that is already being made here in the Fort Lauderdale community.

President Dennis Wright and his chapter have done a fabulous job with their Leadership Academy, forming strong local relationships with the people here at Nova as well as the Superintendent to make sure that we have a pipeline for success for our young people and it’s not just a one and done. If we can replicate this program across the country among all our 110 chapters there are going to be many more youths that benefit from that.”

C.H.A.N.G.E. according to Runcie is an acronym which means,” Children Have a Need to Grow Everyday.” He voiced particular concern on what he said were huge achievement gaps among African American males in the areas of high school graduation, FCAT scores.

He also noted the disparity between Black and brown students and their white counterparts involving numbers of arrest, suspensions, and expulsions, stating that Broward County had the dubious distinction of leadng the state in those areas in recent years.

Dr. Preston Jones Dean of H. Wayne Huizenga School of Business of Nova Southeastern University is a major reason why this project came together. Dr. Jones along with Broward County Schools Superintendent Robert Runcie, were official sworn in as the newest members of the 100 Black Men of Greater Fort Lauderdale during the luncheon.

He reiterated why he also saw the need to lend his support to the initiative from a personal perspective. Dr. Jones is also personally responsible for having Nova Southeastern University to agree to be the future home for the 100 Black Men of Greater Fort Lauderdale’s Leadership Academy.

“The young men that the 100 Black Men serve, the young boys – I was one of those young boys. The 100 Black Men weren’t around when I was a kid. And I had a number of men who helped raise me to who I am today. My mom raised five by herself. Without the courage and the commitment, the love from within the community- the Scouts, Reverend W.H Thomas, my first scholarship to Purdue University I would not be where I am today. So the young men that we’re talking about today-I was one of them. I wanted to take this opportunity to give back.”

Albert Tucker, vice president of Cultural Diversity for the Greater Fort Lauderdale Convention & Visitors Bureau and 100 Black Men member has worked behind the scenes to support many of the efforts of the local chapter and helped to successfully attract the 100 BMOA National Conference to Broward County first in 2010 and again this year.

“The significance of today’s event is that there are people talking about change in education. When you have such organizations as the 100 Black Men, our Superintendent of Schools, Nova Southeastern University and all the other elements that are important in our community, it’s important to know how we connect the dots for that change.”

“I’m really excited as the principal of Dillard to be able to the Community Empowerment Project of the 100 Black Men of America. I think it’s going to be a great example to the community on what’s happening in our community, what can happen when the 100 Black Men and other organizations throughout the community come together for the betterment of our young boys and girls from that com-munity.”

Former NBA Basketball player and Dillard High School graduate attended the luncheon and pledged his support of the efforts of those organizations involved in the new education initiative.

“I am here today to pledge my support for the 100 Black Men and all their endeavors.

I’m also here to represent The RESPECT Foundation, and I am here as a Fort Lauderdale native who just loves all the work that their doing to support our youth.”

John D. Glover, president and CEO of the BTW High School Foundation, Inc., (the Foundation) announced the award of 20 scholarships and grants, valued at $34,000 during the school’s annual awards ceremony on May 17, 2016. […]