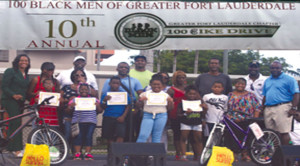 There was no shortage of smiles among the kids who got a head start in the gift department this holiday season, thanks to the efforts of the 100 Black Men of Greater Fort Lauderdale (100BMOGFL). For the 10th year in a row the mentoring program awarded brand new bikes to deserving students who have excelled in the classroom academically.

Anthony Robinson, membership chairman of the 100BMOGFL set the tone for the day as he addressed some 300 family and friends on hand during the luncheon ceremony which kicked off a day of family fun and entertainment.

“We’re extremely excited about this event because these are our kids, kids who have done well in school. Despite what others may say about them they have succeeded.”

Dennis Wright, president of 100BMOGF, outlined the purpose of the mentoring organization highlighting the efforts to help uplift the overall community by supporting students.

“The 100 Black Men of Greater Fort Lauderdale (100BMOGFL) partners with the Broward County School System because it’s important as a community to extend our resources in order to enhance the educational experiences for our youth. The 100 Bike Drive is our way of demonstrating that scholastic achievement is very important and very much appreciated. Inspiration is a key component to the success of our children and we look to be a part of that inspirat.

Robert McKenzie, vice-mayor City of Fort Lauderdale and Broward County School Board Chairperson Dr. Rosalind Osgood provided their support at the event and extended well wishes to the com-munity they serve.

“I think what the 100 Black Men does is never publicized enough. Even though they’re not looking for publicity they’ve been doing this in the com-munity for years. Without organizations like this one there would be no events like this, so we appreciate the work that they’re doing,” said Vice-Mayor McKenzie.

“Today the 100 Black Men are doing a magnificent thing as they giveaway free bicycles to help encourage and motivate our students to continue achieve academically. As we continue to do things like this to recognize our children and motivate them, they will continue to respond in a magnificent way. As the School Board Chair of Broward County, District School Board Member for District 5, I’m just honored and pleased with the 100 Black Men who work all throughout the year to make education a priority and the many things that they do from mentoring, from being guest speakers, to providing bicycles to doing things from a personal level with meeting the needs of family. So I’m just glad to have the 100 Black Men and their commitment to education where they serve our community by celebrating our children and making things available that help our children achieve academically,” added Dr. Osgood.

“My son Isaac Jenkins from Oriole Elementary was awarded a bike because of his significant achievements. He’s one of the leading students at the school in the third grade. My son wants to be a scientists and he’s always looking to improve. He always strives to be the best at what he does. As a dad and parent I couldn’t ask for any-thing else.”

The bike drive along with their annual golf tournament and scholarship luncheon are the two signature events that the 100BMOGFL holds each year as their way of giving back to the community in which it serves. These events would not be possible without the support of area businesses and other organizations from the community.

Tyronne Brewster is both a sponsor and mentor of the 100BMOGF. The retired Teamster from Local 769 got involved with the golf tournament several years ago and has supported the organization ever since.

“We’re one of the sponsors of the 100 Black Men of Greater Fort Lauderdale. Participating with the sponsorship of their annual golf tournament and bike drive is one of the most re-warding things I’ve ever been involved with.”

A young sister ‘hashtagged’ me out of my silo

A young sister ‘hashtagged’ me out of my silo
[…]

Brutality isn’t the only police problem

Brutality isn’t the only police problem
[…]