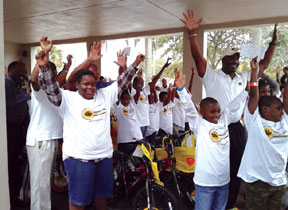 100 BMOGFL ‘Black Saturday’ so much more fun for hundreds of students and their families!

Dennis Wright, president of the 100 Black Men of Greater Fort Lauderdale, is surrounded by student recipients who received bikes for displaying exceptional talent in school for academic performance and good citizenship.

Like it or not “Black Friday” has become the official start of the holiday season, or even a family tradition, some will say. But local, there is another holiday tradition which began several years ago, which was started by the 100 Black Men of Greater Fort Lauderdale (100BMOGFL),  which has had a significant impact on families throughout South Florida.

As hundreds stood in line patiently waiting, deserving elementary and middle school students from Broward County didn’t have to push and shove one another, they didn’t even have to spend a dime to make their holiday wishes come true- thanks’ to the 100 Black Men of Greater Fort Lauderdale’s Annual Bike Drive, which was held Saturday, Dec. 12at Joseph Carter Park in Fort Lauderdale.

To the casual observer it was hard to tell who appeared happier- the students receiving the bikes, their parents, or the mentors from the 100 who distributed the bikes. One thing is for certain, judging by the smiles amongst the crowd, no one left empty handed or disappointed.

Kareema Hodge was beaming with pride as she waited patiently in line with her son Jaheem St. Rose, a fifth grader from Broward Estates Elementary Stem Magnet School.

“Today was great. It was excellent. I love what they’re doing here today. I plan on signing my sons for mentoring as soon as they’re eligible.”

Kareem Timmons stood alongside his daughter Amya, a fourth grader at Lauderhill Paul Turner Elementary, who was grinning from ear to ear as she waited before receiving a brand new bicycle.

I’m proud of my daughter for being great in school and being honored for having good grades,” said Timmons.

“I think this is a wonderful partnership with Broward Estates Elementary Magnet School. It motivates and inspires our kids to want to excel academically as well as showing the partnership between schools and the community.”

Not only did students receive brand new bicycles but they received an early holiday meal as well during the 100 luncheon ceremony.

Students from 19 elementary and middle schools from the Broward County Public School System participated in 100 BMOGFL the bike drive this year.

100 BMOGFL President Dennis Wright may have been the happiest among the bunch who participated in the bike drive give-away. He beamed with pride as each bike was presented to each student as if they were his own son or daughter.

“We want the kids to know that we support them 100 percent, as they work towards improving themselves from an educational perspective,” said Wright.

The 100 BMOGFL mentor young males during the school year in their Leadership Academy where mentors share valuable lessons on life designed to help young men reach their full potential as they achieve their goals in life.

Norvel Bethel has been an active member of the 100 BMOGFL since 2007 and helps coordinate the Leadership Aca-demy programs.

“Our focus is to award young people in the community for doing good thing in their lives, whether through education or by exhibiting good behavior.”

“We need as many positive role models as possible. Kids model what they see,” said Thurston.

“Today’s event is outstanding. The 100 BMOGFL have been doing this for years. We greatly appreciate what they do. It’s all about the kids,” added McKinzie.

Al Tucker, Vice-President Multicultural Business Development for the Greater Fort Lauderdale Convention & Visitors Bureau, has been a long time member of the 100 and one of its greatest advocates and supporters.

“The 100 BMOGFL works to support one of the most challenged groups in the United States, the Black male. It’s essential to our culture and our community to ensure that we provide as many opportunities for the young Black male and the 100 BMOGFL leads that charge.”

“If we do not lift up our community we cannot expect others to do so?”

To find out how you can support, join, or register your child in the 100 BMOGFL Leadership Academy you may go to their website- 100blackmengfl.org or call- Dennis Wright at (954)-240-4123.

Symphony Potato Chips, a Black-owned family business based in Atlanta, GA is quickly becoming a household name. Harmonious and flavorful are words that are used everyday, but try saying that with your mouth full of these gourmet potato chips! […]

There is a Black wave sweeping across the State of Florida

There is a Black wave sweeping across the State of Florida […]