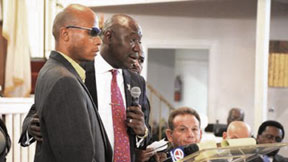 A call for help ends in death: Community wants answers

When Deborah Frazier called BSO to come intervene in a domestic dispute, she never thought that less than five minutes after the officers arrived, her brother would be dead. Gregory Frazier (56 years old) was shot several times and pronounced dead on the scene.

“He had a pocket knife,” Deborah said, “a rusty one at that, they came in and ordered him to get down and he kept saying, leave me alone. If I had known they would have shot him like that, I would have never called.”

Deborah Frazier and her family are in pain, but they are not the only ones.

A group of clergy and a city commissioner rallied together quickly to have this joint forum to try and create some transparency.

Broward Sheriff Scott Israel tried to give his angle on what his deputies were confronted with when they received and responded to a domestic disturbance late last Friday. He said, according to 911 calls Gregory Frazier was threatening family members with a knife.

“Our deputies responded to 911 calls from frantic people that depicted a very violent encounter,” said Israel.

Someone in the crowed church murmured, “is that a reason to execute him without negations?”

What ever happened to negotiations and lesser forms of intervention?

The Frazier family acknowledged they called 911 because they felt Frazier was a threat to them.

Neighbors however, said that this was not the first time that officers have been called to the house because of Frazier.

Xavier, Frazier’s only son is certain that deputies could have reasoned with him rather than killing him. He was confident that the situation had deescalated when deputies arrived.

“I never thought that I would be one of the family members that Mr. Crump would be representing,” said Xavier.

Attorney Benjamin Crump, who has represented Trayvon Martin, Michael Brown and several of the other Black and Brown families who have been murdered by police and those wanna be law enforcement.

Attorney Crump and local Attorney Johnny McCray are working with the Frazier family and they sided with the audience in demanding accountability from all parties who will be investigating.

The sentiments of the audience was that this was just another killing of a Black man by policemen who shot first and asked questions later.

“In a situation where he was posing no threat to anyone at that time, the police did not help the situation,” Xavier Frazier said. “They killed my father.”

As Attorney Crump rifled off the names of Black people who have been killed by policemen in the last few years, it begged the difference to justifiable homicide versus murder.

“It just seems like we get killed and it’s on the house and nobody’s held accountable,” Crump said.

“I never knew my father would become part of a pattern of a horrible trend across this country to shoot first and ask questions later,” Frazier said.

How is it that so many Black and Brown humans be killed by our law enforcement without as much as, “halt or I’ll shoot” command or to use a taser first before ending a life with a gun?

Attorney Crump presented a photo from CBS4 News that shows the lawn chair where he and others say Frazier was sitting down and eating when deputies showed up.

He is confident that Frazier’s posture was one of no threat to deputies.

Israel’s comeback was contradictory in what he said, that’s not the case and that Frazier was armed with a knife.”

“He was not seated,” Israel said. “He was in close proximity to our deputies.”

One question from Attorney Johnny McCray to Sheriff Israel was “why don’t the deputies have body cameras?

Sheriff Israel said neither of the two deputies who fired were wearing a body camera. He said the Florida Department of Law Enforcement will investigate the shooting.

“In six months to a year every deputy in Broward County under my directions will have body cameras,” Israel said.

“If the deputies can justify what they did, then that will appear in the FDLE report,” Israel said. “If they can’t justify it, then they’ll be headed towards an eventual prosecution.”

The Frazier family Attorneys will ask for an autopsy to learn where Frazier was shot and the trajectory of the bullets to determine how far deputies were from Frazier.

The two officers involved in the shooting have been placed on paid leave by BSO until the investigation is complete.

Sheriff Israel tried to ease the sentiments of the church by stating, “I would not let any person in this church think that we are not on the same team. We want the same thing that you want truth and justice.”

Why did they have to shoot so many times; Why doesn’t the police academy train officers to disable the person -shoot for the shoulder or leg, and will justice be served, are among the questions the community wants answers to.