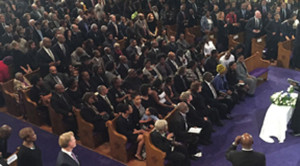 A low key but solid strain of references to current affairs was heard in the eulogies for much loved and respected journalist Gwen Ifill at her funeral on November 19.

The name of the next president of the United States was never spoken, but the subtext of her death six days before the end of an unstable political season was a repeated refrain. Several eulogists noted that her passing was the end of a career featuring clarity and objective reason, qualities that journalism is desperately in need of at this moment.

Ifill was a former reporter for “The New York Times” and “The Washington Post” before joining NBC News and then PBS in 1999 as host of “Washington Week” and the “NewsHour.”

Ifill’s co-anchor on the PBS “NewsHour,” Judy Woodruff, said her on-air partner was needed “more than ever” in light of current events. Her cousin, NAACP Legal Defense Fund President Sherrilyn Ifill, mentioned the importance of the immigrant experience. Gwen Ifill was the daughter of immigrants from Barbados. After Sherrilyn Ifill spoke the words, “she was the daughter of immigrants” the crowd in the packed church delivered a standing ovation.

Before those words former Attorney General Eric Holder told the crowd full of journalists of the importance to live in the principles Gwen Ifill demonstrated in her journalistic career. Warning against losing principles and avoiding asking tough questions and instead choosing to sell out those principles for “access maintenance.”

Ifill died at age of 61 on November 14 at a hospice in Washington, D.C. after batt-ling endometrial cancer for a year. The faces and themes of her funeral were a tribute to a well-con-nected, busy life full of shared experiences with close friends.

Ifill’s jarring death was another substantial loss in the African American journalistic community just 86 days after the sudden death of former NNPA Editor in Chief George Curry on August 20. Many of Ifill’s friends and co-workers were seen crying during and after the sometimes sober but often jovial service at the historic Metropolitan A.M.E church a few blocks from the White House.

The funeral was the second part of a series of tribute events for Gwen Ifill. The veteran journalist was a member of Metropolitan A.M.E. since 1989. Leaders of the historic church honored her by announcing the dedication of a pew in the seventh row of the church.

Ifill was eulogized by her friends including Woodruff, Holder and former New York Times senior editor Richard Berke and “Face the Nation” host John Dickerson. She was also eulogized by the first African American woman to be hired as a reporter at “The Washington Post,” Dorothy Gilliam.

The funeral ceremony ended with a “ceremony of the sistahood.” The ceremony was a silent prayer circle of seven of Ifill’s female friends who held hands around an urn containing Ifill’s ashes. At the end of the ceremony, the participants cried and hugged marking the end of the almost three-hour service.