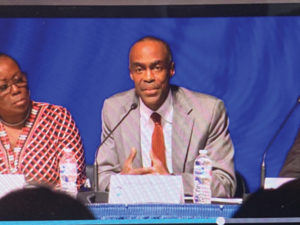 “Anybody who guarantees safety to you is lying to you.” — Brian Katz Broward County School’s Chief of Safety and Security

Over 40 people lined up to speak under the umbrella of school security, but previous such meetings appeared to be politically-motivated attempts to hurt the creditability of Superintendent Robert Runcie and supporters like Dr. Roslind Osgood, the only other Black school board member. The meeting was held in the school’s auditorium with standing-room only while the cafeteria had to be used as an overflow room where several people waited patiently to speak.

It was obvious that several of the attendees had not expected this large crowd of mostly Superintendent Runcie supporters.

“This is clearly the most challenging moment in my career, in my lifetime,” Runcie said. “And I know no matter what we keep doing, I will keep hearing it’s not enough.”

Fred Guttenberg, who lost his daughter, Jaime, in the Parkland school shooting, gave us a view of how the other meetings were flavored, “Why should you stay on your job- this community is right now struggling with what has gone on this past year?”

This gathering of concern citizens, unlike other meetings held outside of intercity districts that were supposed to be about implementing new security measures since last year’s shooting at Marjory Stoneman Douglas High School, differed in one stark way: there were more Black people present than there were others.

Barbara Freeman, a retired teacher who recently lost her daughter, could feel the pain of the parents and offered her suggestion. “As a grieving parent myself, I can honestly say I do truly understand the pain of the MSD parents. However, it does no one any good to blame anyone except the shooter. No one who lost some one was calling for gun control tonight; others were. They seem to pick the easy target, Superintendent Runcie and the school board, who, in my opinion, are doing everything possible to make our schools safer for ALL students and staff. No matter what safety measures are put in place, nothing will ever satisfy them or bring back their loved ones.”

It was noted immediately that this was not going to be a business as usual meeting concerning this issue.

“Just as strongly as you feel about getting rid of Bob Runcie, we feel just as strong that it ain’t gonna happen!” retorted Sen. Perry Thurston, D-Fort Lauderdale.

Several Black church congregations, Black Elected Officials and regular Black folk were in the audience to show concern and to allow others to see that Broward County is made up of more than just one community.

“I believe our walls shouldn’t be a place to hide when our community is silently under attack.

Coming from behind my wall was a no brainer coupled with the mere fact that our presence was recognized by the opposing sides and our people. I close with Shirley Chisholm sagacious words:

“You don’t make progress by standing on the sidelines, whimpering and complaining. You make progress by implementing ideas. We made a difference and our presence spoke loud,” stated Pastor Ricky Scott, New Hope Missionary Baptist Church.

The conversations in other communities outside of Parkland voiced their concerns about the tragedy of the school shooting and how it has over shadowed others, turning into a vendetta to attack Black school board representatives.

“And…to those people who are pimping the pain of the victims and stoking the confusion in our community as you seek to use this tragedy to pursue your political/personal vendettas or professional aspirations – and you know who you are – I pray that God delivers unto you the divine behavior modification process found in Psalm 137: may your tongues cling to the roofs of your mouths…And may your right hand lose its cunning…Until you learn to use your voice, your pens, your keyboards, and your advocacy to heal this community and not continue to hurt it,” Brian C. Johnson, Vice Mayor of West Park who  had that message for those who have used this calamity to advance their political careers.

Tracy Merlin, a Broward Schools elementary teacher, worries concerned the possibility of arming teachers: “Do you, Broward County Schools, promise that you will not allow the arming of teachers? I don’t want to be armed. I don’t want my daughter’s teacher to be armed.” Merlin is the mother of a 7-year-old and a volunteer for the gun control advocacy group Moms Demand Action.

“Dr. Runcie has done an exceptional job as Broward Superintendent! Why we empathize with the Parkland Parents, it is imperative that we not allow this tragedy to be placed on anyone but the shooter and the Gun Industry. Our Community Must show up in FORCE on Tuesday, March 5th, in support of our Public School system and one of the Best School Superintendents in the Nation,” Sen. Perry reinforced.

Robert Runcie is not running from pressure and nor is he demanding the community to support him.

“Leadership in my view is not about cutting and running when it gets really tough. Given the fact that this occurred under my watch here, as the superintendent I need to fix it.

Turn the page on your life

Turn the page on your life
[…]