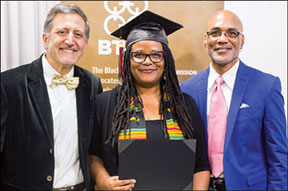 One in a series about recent graduates of the African American HIV University.

Mukamtagara Jendayi’s passion for women’s rights began in college, during her formative undergraduate years at Texas Women’s University (TWU), when she became active in student groups and campus grassroots organizations. It was then that Jendayi quickly grasped that Black women faced racial and class oppression, and so she chose to dedicate her life to fixing it. “I decided to educate and organize my community so that women could have an equal voice, equal access, equal participation and not be limited in any shape, form or fashion,” she says.

Today, at 48, the Fort Worth, Texas, native’s prolific career is a testament to her hard work fighting for women’s reproductive health, rights and justice, as well as to her HIV/AIDS advocacy. Jendayi is a research-study project coordinator at TWU in the department of sociology and social work, where she has been working on a study designed to improve the quality of life for African American women living with HIV.

She is also the co-founder of the Afiya Center—a North Texas non-profit committed to addressing the unique needs of women of color by providing public health education, policy advocacy, community organizing and leadership development—where she is still involved with highlighting the intersection between HIV and reproductive justice. “When I got the opportunity to work in HIV, I felt this was a way to get to the root of the problem of why women were acquiring HIV,” Jendayi explains.

In 2015 she decided to apply to become a Fellow with the Black AIDS Institute’s African American HIV University (AAHU). After witnessing how her business partner, Marsha Jones—co-founder and executive director of the Afiya Center and a former AAHU Fellow—implemented in the community what she had learned from the fellowship, Jendayi was convinced that the program was right for her. “We were actually able to impact a lot of the lives because of the information we disseminated—which Marsha received while she was a AAHU Fellow.”

The program changed Jendayi’s life, and she learned a wealth of knowledge from renowned scientists and professors. “We were taught by people who were actually studying the virus at UCLA,” she says. “It was a privilege to bring this information back to the community.”

According to Jendayi, her AAHU training not only improved her understanding of the science and treatment of HIV but also taught her how to better articulate and translate that to the community. She now sits on the board of the AIDS Interfaith Network, a Dallas organization that for the last 30 years has worked to prevent the spread of HIV and serve the communities affected by the disease.

Because of the disparity in HIV/AIDS information and education between Black and White communities, AAHU is vital. “I’ve seen firsthand how, once the [Black] community has the information, the lightbulb comes on. They completely understand their condition and feel more empowered to manage it and to have a conversation with their doctors,” says Jendayi. “They are enabled to navigate the health-care system better and empowered to advocate for themselves.”

Jendayi is in the early stages of creating a Black Treatment Advocates Network chapter in the Dallas area. She wants Dallas BTAN to focus heavily on Black women, a population in which the disparity gap in receiving HIV/AIDS education and managing their care is huge.

“The AAHU training that I received has made me more confident to advocate for women living with HIV, women at risk and women affected by HIV,” she says. “Before I entered the program, I talked to previous Fellows who said participating in AAHU was one of the best decisions they could have made. I feel the same way. It was the best decision that I could have made because it positioned me to be a leader in my community.”

Education must be governed by standards to achieve the learning goals that all parents seek for their children, said Dr. Reagan Flowers, a noted trailblazer in the field of STEM and the founder and CEO of Houston, Texas-based C-STEM Teacher and Student Support Services […]

Black History Month serves not only to educate, but to inspire

Black History Month serves not only to educate, but to inspire
[…]