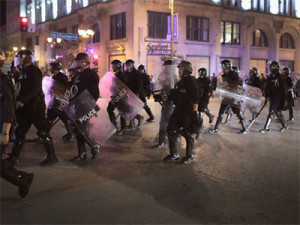 ST. LOUIS – The ACLU of Missouri filed a lawsuit today against the city of St. Louis for unlawful and unconstitutional actions against people during the Stockley verdict demonstrations of the past week.

“As a legal and advocacy organization, litigation is only one of the tools the ACLU uses to effect change,” said Jeffrey Mittman, executive director of the ACLU of Missouri. “To create long-term change, we must address the problems of policing and racial disparities collaboratively. Law enforcement officers, community members, experts, advocates, and elected officials must come together to create sustainable solutions. We must foster understanding and trust.”

“I think everyone deserves the same rights as I do. I just want peace and justice,” said plaintiff Maleeha Ahmad, who was pepper sprayed by police without warning on September 15. “If it hadn’t been for my fellow peaceful protestors – strangers who came to my aid – I don’t know how my eyesight would be today. I would have been left out in the sun, on the ground, with my face burning.”

On both Friday and Sunday, protestors and bystanders had chemical weapons used against them without proper protocol. Officers also interfered with people recording police activities in photos and on video. On Sunday, officers unlawfully detained people – violating their due process rights – when St. Louis Police used a tactic called “kettling” during a protest downtown.

“St. Louis should be a place where all people feel safe against retaliation from law enforcement, and all should receive due process. We should strive to be a place where every citizen feels supported by the communities we call home. This is the vision that drives us into the streets and inspires us to hold our leaders accountable when they betray our values,” said plaintiff Alison Dreith, who was pepper sprayed by police without warning on September 15.

“While long shifts and being the subject of the protest is understandably challenging for police, that is no excuse for violating the Constitution,” said Tony Rothert, legal director of the ACLU of Missouri.

Right now, St. Louis finds itself in a unique political time with an opportunity to change.

“St. Louis has the chance to lead the nation if we take a truly collaborative approach to policing,” said Mittman. “We stand ready to work with any elected official or police leader in the region to reimagine public safety.”