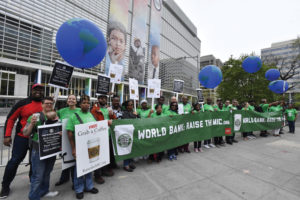 The World Bank classifies nations where people earn $2.73 per day or more as middle-income countries (MICs), even though this arbitrary claim is entirely out of touch with reality. Few people would be able to survive, let alone have any income for shelter and healthcare on such a meager budget – roughly the cost of a cup of coffee in a wealthy country.

To drive home the point at the annual World Bank Spring Meetings two weeks ago, AIDS Healthcare Foundation (AHF) setup its “Raise the MIC” cart in front of World Bank headquarters during lunchtime to distribute free coffee and talk to passersby, including Bank employees, about the need to change how MICs are classified.

“The World Bank has repeatedly lowered the MIC threshold, most recently from $2.86 to $2.73, which artificially reduces the pool of countries eligible for development assistance,” said Denys Nazarov, AHF Director of Global Policy and Communications. “In essence, the World Bank is pursuing its mission of eliminating extreme poverty by classifying it out of existence, which is misleading, immoral and counterproductive.” 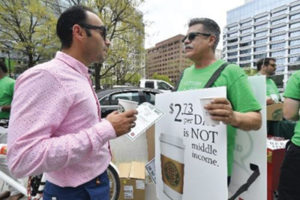 Many countries impacted by the HIV/AIDS epidemic are in the MIC category, which limits their eligibility for international assistance, such as funding and access to commodities like condoms, and imposes higher prices for lifesaving medicines—up to 10 times the costs paid by low-income countries for the same drugs. AHF’s “Raise the MIC” campaign highlights that disparity and works to keep resources in the countries that need them most.

Several people who stopped by to pick up coffee on the way to the Bank complimented the campaign-branded cups, which carried advocacy messages along with the hot beverage. The distribution was followed by a boisterous picket demonstration, with over 25 volunteer advocates carrying signs, three-foot world balloons and chanting for the World Bank to do the right thing and change its MIC definition. Four years into the campaign, AHF has no intention of relenting and will continue to advocate for the World Bank to “Raise the MIC.”