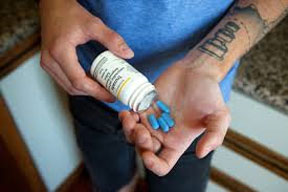 Adam Zeboski takes Truvada, a daily pill that has been shown to prevent infection with the virus that causes AIDS (Credit Thor Swift for The New York Times)

Federal health officials recommended Wednesday that hundreds of thousands of Americans at risk for AIDS take a daily pill that has been shown to prevent infection with the virus that causes it.

If broadly followed, the advice could transform AIDS prevention in the United States — from reliance on condoms, which are effective but un-popular with many men, to a regimen that relies on an antiretroviral drug.

The guidelines tell doctors to consider the drug regimen, called PrEP, for pre-exposure prophylaxis, for gay men who have sex without condoms; heterosexuals with high-risk partners such as drug injectors or male bisexuals who have unprotected sex; patients who regularly have sex with anyone they know is infected; and anyone who shares needles or injects drugs.

Officials at the Centers for Disease Control and Prevention have long been frustrated that the number of H.I.V. infections in the United States has barely changed in a decade, stubbornly holding at 50,000 a year, despite 30 years of official advice to rely on condoms to block transmission.

Although there is no guarantee that gay men will adopt the drug regimen, federal officials say something must be done because condom use is going down. In a C.D.C. survey in November, the number of gay men reporting recent un-protected sex rose nearly20 percent from 2005 to 2011.

Nevertheless, advocates for the drug regimen were elated at Wednesday’s announcement.

“This is wonderful,” said Damon L. Jacobs, a therapist in Manhattan who is HIV negative, has been on the regimen since 2011 and runs a Facebook page promoting it. “When an institution like the C.D.C. makes a statement, it makes a profound difference to the doctors who are ambivalent.”

Dr. Jonathan Mermin, director of the C.D.C.’s national center for AIDS and other sexually transmitted diseases, said the new guidelines should save many lives.

“On average, it takes a decade for a scientific break-through to be adopted,” he said. “We hope we can shorten that time frame and increase people’s survival.”

While many antiretroviral drugs could in theory be used for the drug regimen, the only pill approved for that purpose by the Food and Drug Ad-ministration is Truvada, made by Gilead Sciences.

Truvada, a mix of tenofovir and emtricitabine, is considered relatively safe with few side effects. Generic versions are made in India, and it has be-come the backbone of AIDS treatment in poor countries.

Common side effects include headache, stomach pain and weight loss. Rare but serious ones include liver and kidney damage.

Officially, the C.D.C. is endorsing the drug regimen only in conjunction with condoms. But health officials say they know that some people will stop using them. Many gay men, including Mr. Jacobs, re-port doing just that.

That raises their risk of contracting other diseases, like syphilis and gonorrhea. But health officials argue that the benefits of taking the drug re-gimen outweigh the risks.

Making the perfect the enemy of the good is something we’ve got to get over,” said Dr. Anthony S. Fauci, director of the National Institute of Allergy and Infectious Diseases and the country’s best-known AIDS doctor. “I strongly support the C.D.C. doing this.”

Syphilis and gonorrhea can usually be cured with antibiotics, but H.I.V. lasts for life and is fatal if left untreated. Even those treated properly of-ten develop early heart disease and other problems.

Since 2010, three separate studies using Truvada have shown that when taken daily it can vastly reduce the chances of infection. That held true for gay men, heterosexual couples and drug injectors. In the study of gay men, known as iPrEx, men whose blood tests showed they had taken their pill every day were 99 percent protected.

The new guidelines say patients should have an H.I.V. test before starting the regimen, to make sure they are not already infected. (Prophylaxis involves doses of two drugs, but anyone with the disease should be on triple therapy.)

Patients should be retested every three months to be sure that they are still H.I.V. negative, that they are not developing side effects from the drug and that they have not caught any other sexually transmitted diseases.

While many AIDS specialists endorse the drug regimen, it has not caught on among doctors as a whole.

A survey of 1,175 infectious disease specialists in the United States and Canada published in December showed that 74 percent supported it, but only 9 percent had actually prescribed it.

“There’s a lot of inertia among doctors, and a strong statement from the C.D.C. will be pretty valuable for over-coming that,” said Dr. Demetre C. Daskalakis, an AIDS specialist at Mount Sinai Hospital in New York who has many patients on the regimen.

Also, the drug regimen has not caught on among gay men, who are by far the largest risk group.