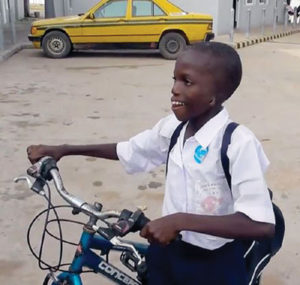 *The trigger topic “immigration “is center stage on both sides of the Atlantic; far right Americans hate the so-called “illegals” while the UK’s immigration policy is reportedly becoming more and more racist.

As reported by USA Today, America’s first ladies, current and former, have weighed in on the “zero tolerance” policy that is leading to migrant families being separated at the U.S.-Mexico border.

Donald Trump’s immigration policy, announced by Attorney General Jeff Sessions on April 8, calls for anyone entering the country illegally to be met with “the full prosecutorial powers of the Department of Justice.”

So, how do UK immigration practices compare to US practices?

Well, eight-year-old Mohammed Cham, for example, is among the most vulnerable (the children) who are affected by these disastrous immigration policies.

Cham is an African boy born without ears who has been refused entry into Britain for a life-changing operation that would allow him to hear properly for the first time.

The government won’t allow him into the country after his application for a temporary visa was denied. Cham was due to fly from his native Gambia to Scotland next week to have an implant inserted into his ear during surgery.

The charity Project Gambia People Feeding People had arranged the trip and is now urging the government to reconsider its decision, the Daily Record reports.

The charity spent 16 months planning the trip. They had arranged for NHS Lanarkshire ENT specialist surgeon Arunachalam Iyer to carry out the surgery at Monklands Hospital in Airdrie.

“When he was told he wasn’t allowed to come to Scotland, he burst into tears. He’s broken-hearted and doesn’t understand why we can’t help him anymore.

“It’s cruel and cold. People making these decisions sometimes need to look at the person and what being allowed to come here will mean to them.

“Life should not be governed by a rulebook. He’s been so excited about coming over and now, through no fault of his own, it’s not happening.

“Dr. Iyer is one of our biggest supporters and has already supplied deaf children across West Africa with 15,000 hearing aids. He kindly agreed to see wee Alieu and was planning to operate on him.”

Frank insists the charity followed every procedure on the visa application and were stunned to discover it had been denied.

“They knocked us back because we never told them the name of the surgeon and because we didn’t mention the hospital that the operation was to be performed in – but we were never asked to provide that information.

“Why refuse visa applications with stipulations we as a charity were never asked to adhere to? We answered every question asked of us.

“These questions were never posed and if they were, we would have answered them. To refuse the visa application on those grounds is a joke.

“We just wanted to help give a child the chance to hear again but it’s being made so difficult.

“We promised wee Alieu we would get him sorted and we keep our promises – always.”

Mohammed came to their attention when he arrived at the school and Frank noticed how self-conscious he was.

“He’s grown up in poverty and because he has no ears, he’s shunned by people in the community.

“I noticed straight away that he has no confidence and he would try to hide away.

“He knows sign language but coming to Scotland and having an implant fitted would give him the chance to hear properly.

“In the future, we’d like to look at creating ears for him using cartilage and we’re speaking to doctors about it.

“His family can’t afford medical treatment. He’s a character and deserves the best chance at life. We are all heartbroken his visa has been refused.

“We put so much planning and effort into raising funds to bring him over here and now it’s all been shattered.”

The Home Office said it is not normally possible to come to the UK as a visitor to access NHS services.

A spokesperson said: “Applications for an individual to visit the UK for medical treatment must demonstrate that private healthcare arrangements are in place ready for their arrival.

“In addition, they must include a letter from a doctor or consultant detailing the medical condition, estimated cost and likely duration of the treatment and where it will be delivered.

“Where that is not provided, applications will be refused.”