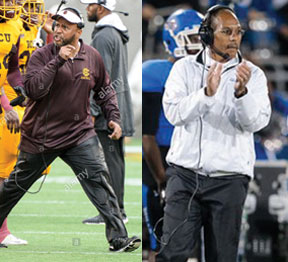 After game interview with coaches

Well, first and foremost, I have to take my hat off to my football team and my staff. The guys did a great job not quitting and continuing to stick with our game plan and stick with what we set forward to do early in the week, go out and execute. We came out early and they put the first drive together and drove the ball down the field. We held them to a field goal and our offense got on the field. We got hot the first three drives of the game and scored, and we started to sputter a little bit. We started to have penalties sneak in there. Just lost our heads for a little bit but looking at the outcome of the game the guys got focused again after halftime and went back out and finished up our job.

Well, job well done, and I thanked those guys yesterday at the luncheon because that was the group that helped keep our football team together. Going through all this, having 16 guys out at one time, down to our fourth string quarterback at one point in time. They never hung their heads. Our days of practice were the same when we were 0-5 as they were when we started camp and those guys hung in there. They led this football team. The result is days like today.

People that know me, I’ll say that’s what they’re supposed to do. If they don’t score they can’t win and that’s what I expect from our defense because they’re a stout, sturdy bunch so we expect that from them and they went out today and they did bail us out a little bit. We had a brain fart a little bit earlier because we didn’t cover the tight end. We dropped coverage. We let them score, didn’t get momentum back for a little bit. We put that behind us and the team pushed forward.

Coach Wood: We’ve concluded obviously my second (Florida) Classic. I can’t remember what the number is since we’ve been playing a lot of games here. We just couldn’t overcome some of the miscues that we had in three phases of the game: offense, defense and special teams. They had a couple of miscues as well. We we’re only able to come up and get three points in two of those situations. Touchdowns were what we desired. It didn’t happen. Again, overall defensively we just gave up too many explosive plays in the second half there. During the course of the ballgame, I think to really mount a competitive comeback but the shanked punt and then we penalized ourselves there late in the third or early in the fourth, and they moved it half the distance to the goal line and scored. When you do things like that it’s hard to beat a team that’s already in front of you, that’s already beating you, that’s already ahead point-wise. That’s kind of where it’s at. I think our kids fought hard. They played hard. We prepared hard last week for this game like we do every year and for every game. It’s disappointing to finish on a losing note, but we’ll be back and we’ve got a bright and promising future at Florida A&M football.

Well, we got off to a rough start as you know. We started off—we were 0-for-4 at one point. We got our first win against Savannah [State] and were able to win some games, I think back-to-back even in some cases and get ourselves to four wins. Again, today going into the game we were at fourth in the MEAC, they picked us to finish eighth, so we were glad about that. We were hoping to solidify that spot so there is improvement. Was it where we wanted to be? No. But I’m really encouraged about some of these young players in this program. Ryan Stanley being one, and Devin Bowers being back as well. Just really encouraged about some of the young players and then the opportunity to go and recruit and continue to build our program.