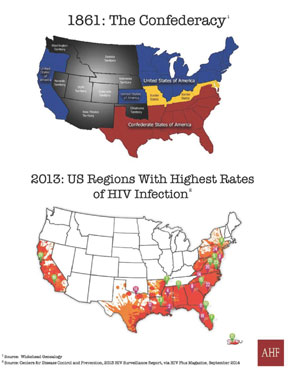 AHF: Map of Confederacy is a near mirror of highest HIV rates in US

Xanax Doctors Online Buy Xanax Vietnam A comparison of maps of the 13 Confederate States with a heat map of states, cities and locales with the highest rates of HIV in the US suggests entrenched, widespread health disparities in the South.  As debate unfolds around the public display of the Confederate flag, AHF—which has free HIV/AIDS treatment clinics in nearly half of the former Confederate States—examined current HIV incidence in the US and found a striking overlap of HIV case rates within Southern states of the former Confederacy.

http://boldmarketing.com/category/testimonial/page/2 Buy Xanax Dubai WASHINGTON, D.C. http://bisnisbajumu.com/dating-site-older/senior-single-dating (Business Wire) — Recently AIDS Healthcare Foundation (AHF) released a side-by-side comparison of a map detailing the geographic regions with the highest rates of HIV in the United States and a map of the 13 states of the Confederacy shows a strong correlation that with long-documented, wide-spread public health disparities that continue to plague the Southeast.

http://richlistgroup.com/?author=9 Indeed, while New York Times columnist Paul Krugman has already pointed out that only one former member of the Confederacy has expanded Medicaid coverage for low-in-come people under President Barack Obama’s Affordable Care Act, the concentration of today’s HIV/AIDS epidemic closely follows the map of the Confederate States of the United States as it stood in 1861, when the Battle of Fort Sumter in South Carolina ignited the Civil War. Given that the Census Bureau has reported that over half (57 percent) of the Black American population is concentrated in the southern states and that Black Americans are 55 percent more likely to be uninsured than white Americans, the lack of equal access to quality medical care—including routine HIV testing and medical treatment—under-scores the urgent need for coordinated action to address these enduring health disparities and fight the AIDS epidemic sweeping through minority communities in the South.

“Today, income inequality, stigma, fear, and lack of equal access to healthcare are just a few of the variables that contribute to exploding HIV/AIDS rates in the Southeast—particularly among young, Black, gay or bisexual men,” said Michael Weinstein, president of AHF. “The danger of the epidemic is compounded by the lack of routine HIV testing pro-grams at healthcare facilities that help detect the virus at early stages. These factors were named in national headlines generated by a WABE public radio story that reported that in Atlanta, one of the most populous cities in the Southeast, nearly a third of newly diagnosed people have already progressed from HIV infection to a clinical diagnosis of AIDS. We need to mobilize on all fronts and work together as a com-munity to address these dis-parities in health care.”

AIDS Healthcare Foundation (AHF) is the largest non-profit HIV/AIDS healthcare provider in the USA. AHF currently provides medical care and/or services to over 430,000 individuals in 36 countries worldwide in the US, Africa, Latin America/Caribbean, Eastern Europe, and Asia.