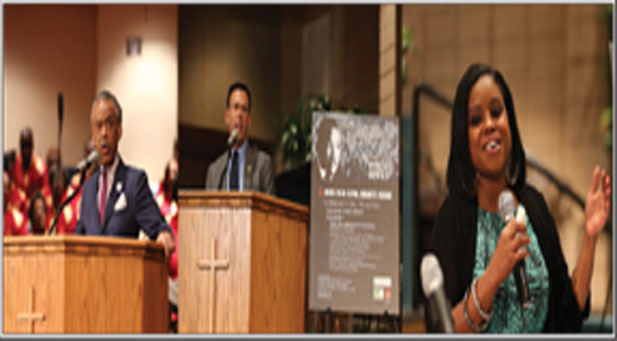 AIDS is a Civil Rights Issue

During the turbulent 60’s the Rev. Dr. Martin Luther King, Jr., along with a host of other dignitaries, fought for privileges – several decades later the Rev. Al Sharpton is in the trenches with Aids Healthcare Foundation [AHF] and The New Mount Olive Baptist Church (NMOBC) leading a crusade to obtain civil liberties for individuals who are infected and affected by HIV/AIDS.

The HIV/AIDS virus continues to dismantle the lives of people from all walks of life and it just hangs around, having acquired the status of a dreaded disease that disproportionately affects the lives of African Americans more than whites.

“The battle that we face is states’ rights versus the national government,” said Sharpton from the pulpit of the NMOBC, located in Fort Lauderdale. “We must always protect the minority against the moral majority.”

On April 23, a town hall forum was held at the church to explore poverty, lack of insurance/education/money/unemployment/housing and being incarcerated, which are the rudiments that keep driving this epidemic forward.

Sharpton says that “AIDS is a Civil Rights Issue” and we must stand together.

Moreover, it’s the new theme of this campaign to enlighten the public about everything the public needs to know about HIV/AIDS.

“We must stand up for everyone’s rights,” he said. “This isn’t about who suffers the most. It’s about us rising out together.”

Rising above her circumstances of being HIV positive since birth, Hydeia Broadbent, 29, International HIV/AIDS activist & humanitarian, spoke briefly during the forum about not having any medical coverage.

“I lost my insurance and I’m not taking any medication be-cause I don’t have the money to pay for them,” said Broadbent. “My medications cost $3,500 a month.”

A poster child for HIV, Broad-bent was abandoned at the University Medical Center of Southern Nevada in Las Vegas where Patricia and Loren Broadbent adopted her – she’ll be turning 30 in June.

Dr. Marcus Davidson, senior pastor of NMOBC, along with Dr. Rosalind Osgood, CEO of Mount Olive Development Corporation [MODCO] (a strategic arm of the church) was instrumental in bringing the town hall discussion into a reality.

Osgood says that MODCO has taken a very progressive approach to eradicating AIDS in her community. “We provide housing,” said Osgood. “We have been providing service for 18 years. We reach our people through love.”

It was love that lifted the blinders off the eyes of Bobby R. Henry, Sr., publisher of the Westside Gazette, and allowed him to come to terms with himself and his daughter’s status.

“In 1989 I found out that my daughter was infected and thats when I became affected, Henry said.” “I’ve always felt and stated that AIDS was not an alone decease and we opened the door to helping my daughter.”

Additionally, Henry took the test and his results came up negative.

Many members of the South Florida community have been under lock and key, and there-fore possibly exposed to the HIV/AIDS virus. “Our inmates get tested while in jail,” said Broward Sheriff Scott Israel. “It’s strictly volunteer.”

The funding for HIV/AIDS is constantly under the knife and Jason King, Legislative Affairs spokesman for AHF, says his agency is delighted to collaborate with Sharpton and Mount Olive.

“We have to penetrate the Black community to get the word out,” King said. “The Rev. Al Sharpton believes in the work that we do and our mission. What better way to reach the people than having symposiums such as this?”

“AIDS is a Civil Rights Issue” Evening of Action with Rev. Al Sharp

As part of its national “AIDS is a Civil Rights Issue” advocacy and awareness campaign, which was developed in response to the fact that African American and Latino communities continue to be disproportionately impacted by […]

This year as we again observe the days set aside to mark and remind us of both the tragic passing and praiseworthy endurance of victims of HIV/AIDS among us, we, of necessity, continue to search […]

During the of summer of 1992, Rae Lewis-Thornton, barely 30 years old and at the height of a promising career as a political organizer, decided it was time to tell her closest friends and loved ones that she was dying. […]