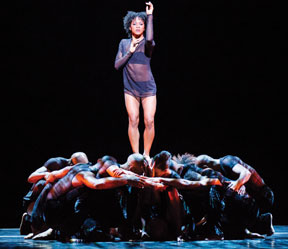 As a former Dancer, lover of arts and culture, and a regular patron of the performing arts, I am ashamed to admit that until Sunday February 26, 2017, as Black History Month symbolically comes to a close, just prior to an evening of brilliant wins for Black cinema at the Academy Awards, I hadn’t seen an Alvin Ailey Production in person.

As the curtains rose at the Adrienne Arsht Center Ziff Ballet Opera House and we were greeted with the playfully mischievous melody of Dizzie Gillespie, I was happy that my lifelong estrangement from Ailey’s work was finally over.  The Winter in Lisbon pays homage to the late Dizzy Gillespie as the Ailey ensemble gleefully creates a scene with swing dance movements not unlike what we can recall was popular in the 1920’s. Ailey’s performers flirt and play in lively tropical garments that immediately awaken the audience’s senses. The raw intensity of The Winter in Lisbon’s first Act is tempered by the second Act which brings together two lovers who’ve found romance in the midst of the First Act’s romping raucous.  Initial parry transforms into sinuous connectedness that communicates the beginnings of an everlasting love.

Ella is cheeky, set to the syncopated scatting of Ella Fitzgerald. Two Ailey Dancers dressed in black tuxedoes prance about the stage following Fitzgerald melody in rhythmic synchronicity.  The piece reads a bit like slap stick comedy, sprightly in its delivery. The duet is chock-full of high leaps, patty cakes, fast limbs, and jovial interplay. Shorter than the rest of the pieces presented, Ella is a fast but jaw dropping performance.

Revelations, an Ailey Classic celebrating its 50th year, is as visually breathtaking and beautiful as it has been to described to me. An ecclesiastical masterpiece, Revelations begins with the Ailey ensemble in brown garments as if of the earth, in staggered formation, as the strength they bear through nuanced struggle is revealed in the extension of long, ever so gently quivering limbs reaching outward and above as if to absolve of pain and suffering. They are released in the following Act as Wade in the Water and Rocka My Soul washes away strife and the full ensemble reunites for a celebratory dance of deliverance under the Southern Sun.

The richness of Ailey’s choreography and overall production will resonate with all viewers. It was a beautiful Sunday treat and I look forward to seeing other Ailey productions including Chroma and Annointed.