Ain’t too Proud, The Life and Times of the Temptations is currently playing to packed audiences at the Au-Rene Theater at the Broward Center for the Performing Arts in Fort Lauderdale, February 8 – 20, 2022. Here is why you should go:

This dynamic musical, chronicles the extraordinary journey of the amazing Temptations. It would be hard to find anyone worldwide who haven’t heard of the Temptations.  “The Temps” are a Tony Award winning, Grammy Awards winning, Rock & Roll Hall of Fame group with 42 top 10 Hits, 14 of which made it to number one. The group was formed in 1960 and they are still going strong today, appealing to multiple generations, cultures and ethnicities. But there is more. Their personal stories will thrill you, make you laugh, cry and sigh, dance and sing.

Otis Williams, the Temptations’ founder and sole surviving original member, has used his “personal story” as the source of the Broadway theatrical release. Ain’t Too Proud was written by playwright, Dominique Morisseau, a Detroit native who grew up on the Temptations’ music.

The show is packed with singing-along-like-no-one-is-watching-you songs like, “Papa Was A Rolling Stone”, “If you don’t know me by now”, “Baby love”, “What becomes of the broken hearted”, “My Girl” and of course “Ain’t too proud to beg” along with many more Temptations’ hits.

The original show first opened on Broadway in 2019 and closed in January of 2022. The national tour launched in December of 2020 at the Kennedy Center in Washington D.C. for five weeks before hitting the ground running.

The play is narrated by Marcus Paul James who plays Otis Williams, as he leads the audience through the power and passion of the “#1 R&B Artists of All Time” (Billboard). The Temps are joined on stage by actors playing The Supremes and Tammi Terrell for ballads that take you back in time and make your heart sing.

Treston J. Henderson is a “swing” or understudy for multiple characters in the musical. Treston is a 2020 graduate of Austin Peay State University in Clarksville, Tennessee. He got his first big break in this musical by posting a video of himself singing a Temptations’ song on Instagram. That gained him an opportunity to audition and land the role of a swing. He shares that the diversity seen in the packed audiences is a testimony, in part, to the fact that the Temps refused to play to segregated audiences, thus helping to push integration to the forefront. 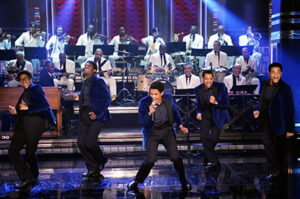 “R&B groups of today may not have been a thing if the Temps had not refused to play to segregated audiences. They were brave and that helps me as a Black man to want to be brave always.”

This musical is chock full of titbits of behind-the-scenes information in the history of this worldwide iconic group. For instance, the personal highs and lows of the original artists and the fact that since their start in 1963 to today, there have been 24 Temptations. Otis is the only original member of the group still alive.

As Otis himself points outs in the play, “The only thing that lives forever is the music.”

Ain’t Too Proud will be touring 50 cities across America. But for now, treat yourself to an unforgettable evening of some of the smoothest dance moves ever crafted on a stage, heart moving melodies and picture-perfect performances as you walk down memory lane with the music of a world icon.