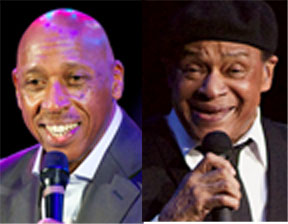 An interview with Jeffrey Osborne

This Saturday, Jeffrey Osborne and Al Jarreau will perform live in South Florida. Westside Gazette caught up with Osborne recently to see what could be expected at the concert.

The youngest of 12, Jeffrey grew up listening to a wide variety of music. Sarah Vaughan and Ella Fitzgerald to Miles Davis and Clifford Brown, each family member had their own favorites.

Despite his love for Motown and doo wop, Osborne really grew up listening to jazz and standards.

When asked if he had plans for a new album release Osborne responded, “I’m currently working on a project, scheduled to be released early next year. The last album was with George Duke. It was the last production George did before his death. This was my favorite and most cherished project, because of the love, adoration and respect I have for George.

“He was an incredible piano player, producer and artist. I don’t know where my solo career would be without George, he gave me my first start, by producing my first three albums.” George was the person he worked with after he left LTD.

“I thought of my whole family while I was recording this,” says Jeffrey wistfully. “I had an older brother, Clay, who was a great jazz singer in Providence, R.I. This is the kind of record that he would do,” he adds, quietly.

Jeffrey stays performance ready through the vibes of his audience; he loves live performances over studio recording. In addition he works out daily and eats healthy with lots of hydration.

Jeffrey’s on-stage movements are exciting and unique; when asked if his unorthodox left motion hip winding is because he is left handed, he replied with a hearty laugh, “No, I’m right handed and that move is just innate.”

When asked how he keeps his voice performance ready, Jeffrey said, “Some get better with time while others get worse over time.” His recommendation is to take care of your instrument (vocal cord) as you would any other instrument. Keep it clean… Jeffrey enjoys steam to help his vocals also he gargles with a golden seal gargle solution (which he admits doesn’t have the best taste).

Besides music, Jeffrey enjoys giving back to the community. He has six different charities – all children based – and he is most proud of being able to give back to his home-town community. He has an annual golf tournament which is hosted by Magic Johnson each year and many celebrities come out to support each year. He hosted a celebrity comedy show and soft ball game as well this year. This is the fourth year of his charity organization and Jeffrey couldn’t be more proud of them all and looks for-ward to each year of giving back to the children of Rhode Island.

He is very passionate about his charity The Amos House, which takes people off the streets, provides shelter, food and job skills; also an additional charity uses the only nine-hole golf course in his home town and teaches children how to play golf.

The children and adults as well look forward each year to the charity celebrations which are for a great cause; in addition they get to see many celebrities that they never would have had a chance to be up close and personal with.

Jeffrey wants South Florida to come out and enjoy an evening of all natural, original, authentic music. He loves the music of Al Jarreau and he himself is excited about seeing him perform. “This type of original music may not be around much longer” so Jeffrey encourages all of South Florida to come out and enjoy while we still have these musicians around. He knows it will be a great evening and you will not be dis-appointed.

Osborne and Jarreau will be performing at the Broward Center Au Rene Theater, 201 S.W. Fifth Ave., Fort Lauderdale, Fla on Saturday, Sept. 19 starting at 7 p.m. there are some tickets still available call (954) 660-6307.

The World AIDS Museum & Educational Center, Vitas Healthcare, and The Westside Gazette presents, ‘Saving Grace’, a multimedia exhibit on the impact HIV/AIDS has had on the Black community

‘Saving Grace’, a multimedia exhibit on the impact HIV/AIDS has had on the Black community […]