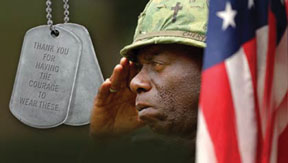 For the last two semesters, Army veteran Billy Leonard, 54, has been working towards his Associate of Science degree in Funeral Service Education at Miami Dade College (MDC) so he can become a funeral director.

The problem is his Veterans Retraining Assistance Program (VRAP) only pays for one year of educational benefits, but they specify that his curriculum must lead to an Associate’s Degree.

Now Leonard and thousands of other veterans across the nation are forced to dropout of college, because VRAP is over and done with.

“This whole situation with VRAP is so depressing,” said Leonard during an interview at MDC North campus. “I don’t know what I’m going to do.”

Leonard has serious concerns about his education and wants to know why VRAP was only funded for one year, but stipulated that he pursue an Associate’s Degree, which normally takes about two years to obtain.

VRAP is a job training program which was crafted by US Congressman Jeff Miller (R-Fla.-01) specifically to give veterans an opportunity to get short-term job training for in-demand occupations.

“Chairman Miller believes that taxpayers deserve to know whether programs are working as intended before they are expanded,” said Curt Cashour, House Committee on Veterans spokesman. “Before VRAP is expanded, more study is required to determine whether veterans getting training through the program are getting and keeping jobs.”

These days getting and keeping a job is a priority for veterans but Leonard’s classes end in April, and VRAP expired on March 31.

Earlier this legislative session H.R. 562, the VRAP Extension Act of 2013, was introduced by Chairman Miller and rolled into H.R. 537, which was passed by the House and sent to the Senate where it’s been stalled.

The Miami Times contacted Michael Briggs, spokesman for Senate Committee on Veterans’ Affairs regarding VRAP, and this is what he had to say “…if you’re looking for quotes we can’t help with that.”

H.R. 537 has come to a standstill in the Senate so in order for Leonard and other veterans to continue receiving their monthly stipend of $1,648, the Veterans Affairs [VA] stepped up to the plate and disbursed funds to the end of the semester.

There are over 50 veterans enrolled at MDC North campus in VRAP who have no clue as to whether or not the program will crank back up, and this notion makes Leonard fret about how he’s going to pay for his education.

“I’m worried and I have no answer to how I’m going to finance my education,” he said. “I would like to see VRAP continue for another year so I can complete my Associates Degree.”