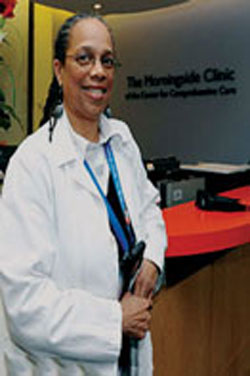 By the year 2015, nearly half of the people living with HIV in the United States will be 50 years or older. This group consists of the following:

As the members of this group approach their senior years, they must grapple with a unique set of challenges. First, this group suffers two stigmas: that of HIV and that of aging. For example:

1. They must deal not only with the toll that HIV takes on the body but also with the effects of aging. Like HIV, aging affects the immune system. Older people with HIV are like-ly to have lower T-cell counts and more advanced disease than their younger counter-parts. When taking HIV medications, those in this age group are also less likely to experience an increase in their CD4 count than are younger people with HIV. However, older people with HIV are more likely to take their medications and control the virus.
2. Older people with HIV experience an accelerated aging process. A 55-year-old with HIV may have medical conditions that are common to an HIV-negative person in his or her 70s. For example, a 55-year-old HIV-positive person might have muscle loss, fatigue and bone loss, which are typically more common in older individuals. For that reason, people over age 50 living with HIV should be routinely tested for such conditions as heart disease, cancer, kidney function and dementia.
3. Older Americans are more likely to have conditions such as hypertension, diabetes and kidney disease. Since an HIV-positive older person is more likely to be taking medication for other ailments as well as for HIV, there is the possibility that an adverse reaction could occur as a result of the multiple medications.

An added complication for women is that some of the symptoms of HIV mimic the symptoms of menopause. For example, fatigue, hot flashes and facial flushing are common to both conditions. As a result, many women and physicians dismiss the symptoms, causing diagnosis to be delayed. How-ever, regular screenings for HIV can ensure that men and women over the age of 50 are diagnosed as early as possible, which is crucial to living longer with the disease.

The Case for Prevention
When it comes to prevention, many people over age 50 are unknowingly putting themselves at risk for HIV.
• Older women may not insist on the use of condoms because they’re not worried about pregnancy.
• Men over age 50 who have erectile dysfunction may resist using condoms because doing so makes intercourse more difficult.
• Men and women who are widowed or divorced and becoming sexually active with a new partner may not be aware of their risk for the disease.

Compounding the problem is the fact that many physicians don’t talk with their patients about sex and the risk factors of HIV.

But the reality is that everyone should use a condom. Whether you’re male or female, young or old, if you have sex without a condom, you put yourself at risk for HIV and other sexually transmitted diseases.

Not All Doom and Gloom
If you are over age 50 and find yourself with an HIV diagnosis, there are many resources available to help you live a full and complete life.
• Antiretrovirals can re-store the immune system, though not to the extent that they would for someone younger.
• A person with HIV can improve his or her health by avoiding cigarettes and drug abuse.
• Depression screening can determine whether mental-health resources are needed. Depression is more common in an HIV-positive elderly person than in an HIV-negative elderly person.
• Other diseases common to aging, such as diabetes and hypertension, can be kept under control.
• Support groups can help people deal with the shame and stigma that frequently accompany HIV.

While any person who receives an HIV diagnosis should get into treatment as soon as possible, those over 50 are particularly urged to get on ARVs right away. Because aging in itself has an adverse impact on health, early treatment can go a long way toward protecting your immune system.

Tamara E. Holmes is a Washington, D.C.-based journalist who writes frequently about emotional health and wellness.

By Ruth Manuel-Logan Philip Burns (pictured), a former elementary school teacher of the year who was arrested last November, was recently indicted for child molestation, according to prosecutors. A five-count indictment filed Wednesday charged the HIV-positive Burns with child […]