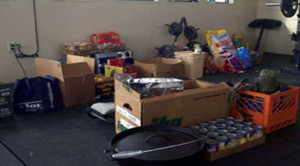 There were a few cartons of dry goods like canned beans and mac and cheese, a few more sealed boxes, some ramen, and sacks of oatmeal and flour.

Federal authorities are planning to cut off the power of the wildlife refuge in Oregon that has been taken over by militia, exposing the armed occupiers to sub-zero temperatures in an effort to flush them out.

Armed militants will begin their third day at the Malheur National Wildlife Refuge, a remote federal outpost in eastern Oregon, on Tuesday, and have vowed to remain for months in protest over the treatment of two local cattle ranchers.

A federal government official told the Guardian that authorities were planning on Monday to cut the power at the refuge.

“It’s in the middle of no-where,” said the official, who is based in Washington, DC, and has knowledge of the planned response to the militia. “And it’s flat-ass cold up there.”

The official, who asked not to be named, said they were not privy to the FBI’s plan of action. However, they said the US Park Service, which is leading the crisis management reaction to the occupation in liaison with the FBI, planned to cut the power to the building where the militiamen are spending their nights.

Any such move would mark a significant escalation in the crisis. The local sheriff, FBI and other law enforcement officials have so far held back from confronting the militia, who are heavily armed and have look-outs on a watch-tower.

The militia have said they do not want a violent confrontation but made clear they are armed and prepared for the arrival of law enforcement officials. However, it appears that federal authorities were planning to use the power cut, and an attempt to starve the militia of supplies, in order to force them out.

“After they shut off the power, they’ll kill the phone service,” the government official added. “Then they’ll block all the roads so that all those guys have a long, lonely winter to think about what they’ve done.”

Snowstorms are expected in the wilderness surrounding the refuge on Tuesday, which is some 30 miles from the town of Burns. At night, temperatures are forecast to plummet to -8C (18F).

The militia, numbering few more than a dozen, have been building fires to stay warm and have been sleeping in the building usually used by the US Fish and Wildlife Service, which runs the refuge for wild birds.

Reached by phone around 10.30 p.m. on Monday, Ammon Bundy, a key member of the militia, said electricity in the refuge building was still functioning. He added: “We’re ready and waiting if the power should be shut down.”

Bundy has repeatedly said the group is prepared for the long-haul. However during a tour of the site on earlier in the day, the Guardian was shown a food storage room that did not look like it could sustain a dozen men for more than a few weeks.

It included a cardboard box of apples and oranges, a few dozen pots of instant ramen, 24 cans of chicken noodle soup, a similar number of cans of sweetcorn, peas, beans and chili, and 20 boxes of macaroni and cheese.

There were also three sacks of potatoes, one bag of flour, another of rolled oats, boxes of raisins, a single bag of pretzels and one granola bar.

Calling themselves Citizens for Constitutional Freedom, the militia appears to be led by Ammon Bundy, who has been joined at the refuge by his two brothers, Mel and Ryan. The trio are sons of Nevada rancher Cliven Bundy who was at the heart of a similar standoff with authorities in 2014.

Constitutionalists, militia and rightwing zealots flocked to the Bundy ranch and stayed to defend him from the federal Bureau of Land Management (BLM), which wanted to seize his cows over $1.2m in unpaid fees for grazing on federal land over two decades.

Cliven Bundy has yet to pay those fees, apparently emerging victorious from his head-to-head clash with federal authorities cautious to avoid an armed conflict.

The dispute in Oregon relates to two local ranchers, father and son Dwight and Steven Hammond, who were convicted of arson on federal land (they say they were clearing the land of invasive species to graze their cattle).

The Hammonds surrendered to federal authorities on Monday for the start of an extended prison term.

In an interview on Monday, Cliven Bundy distanced himself from the takeover of the federal parks building spearheaded by his sons.

He said that he was aware of the planned weekend protest in rural Oregon but did not know that the militia planned to splinter away from a peaceful demonstration and forcefully take over the facility.

When asked if he would have condoned the takeover, he laughed.

“I would have questioned them,” he said of his three sons, who are all at the standoff. “What are you doing, taking over property?”

Cliven Bundy, who for years has faced off with the BLM over grazing rights near his ranch in southern Nevada, said he stands behind the spirit of the occupation in Oregon.

“They went up there because we have an abusive federal system that is out of control,” he said. “We’re there in support of ranching families who have been harassed by the federal government for years out here.”

Under current law, only federally licensed gun dealers must conduct background checks on buyers, but many who sell guns at flea markets, on websites or in other informal settings don’t register as dealers. The ATF has issued updated guidance that says the government can consider someone a gun dealer regardless of where the guns are sold.

The administration also said ATF is finalizing a rule to require checks for people buying certain weapons through a trust, corporation or other “legal entity.”

In an attempt to prevent gun purchases from falling through the cracks, the FBI will hire 230 more examiners to process background checks, the White House said.

In advance of the announcement, the president asserted he has the “legal authority” to act here. The president finalized the plan after meeting Monday with Attorney General Loretta Lynch, FBI Director James Comey and other top officials.

“The recommendations that are being made by my team here are ones that are entirely consistent with the Second Amendment,” Obama said Monday, claiming they could “potentially save lives.”

The revived push to tighten America’s gun laws via executive action, however, has resulted in a backlash on Capitol Hill and the campaign trail.

Republicans made clear they would fight the administration and accused the president of overstepping.

Rep. John Culberson, R-Texas, who chairs a key appropriations panel, warned Lynch on Monday that he would “use every tool at my disposal to immediately restrict” DOJ funding if the department proceeds with “new restrictions on our Constitutional rights.”

“I will veto that. I will un-sign that so fast,” Trump said Saturday at a campaign rally in Biloxi, Miss.

“We definitely think there are things he can do,” said Dan Gross, president of the Brady Campaign to Prevent Gun Violence, which advocates for expanding background checks. Gross says his recent conversations with White House aides have left him hopeful.

“It’s very clear that the White House is feeling emboldened,” he said.

On Thursday, Obama will take his argument to prime time, participating in a town hall discussion of gun violence on CNN. He’s slated to make his case for changes in his State of the Union address on Jan. 12.

The high-profile rollout reflects a White House continuing to look for ways to wrap up unfinished business despite an uncooperative Congress.

After all but ignoring the issue in his first term, Obama changed course after the mass shooting at Sandy Hook Elementary in December 2012. Nevertheless, the president failed to push a package of gun measures through Congress, including one expanding background checks.

At the same time, Obama took nearly two dozen executive actions to tighten gun laws, but left a major expansion of background checks out of the mix.

But after the shooting at a community college in Roseburg, Ore. in October, Obama ordered his staff to redouble the effort to look for ways to work around Congress.

The background check provision rests in the murky realm of agency “guidelines,” which carry less weight than formally issued federal regulations and can easily be rescinded. Lynch said the administration chose to clarify guidelines because it allowed the policies to be implemented immediately. Left unsaid was the fact that developing regulations would have dragged out likely until Obama’s presidency ends and would have generated more opportunities for Republicans to intervene.

The new guidance still exempts collectors and gun hobbyists, and the exact definition of who must register as a dealer and conduct background checks remains exceedingly vague.

Cliven Bundy said that he is largely in the dark about the circumstances of the ongoing occupation and that he receives a call from one of his sons once a day with word of their well-being. “I have three sons up there,” he said. “I want to know that they’re OK.”

He said his sons researched the dispute involving the Hammonds for months before planning their protest. “We found out they were good people – well-liked in the community,” he said.

Cliven Bundy said that as far as he knew, his sons weren’t armed. He said that if any violence takes place at the standoff, it will come because of an overzealous government reaction.

“This is a peaceful protest,” he said. “It’s our first amendment right to peaceful assembly and protest. And my boys have done that. They haven’t destroyed any property. They have not infringed upon anyone’s rights.”

The Bundy brothers – and Ammon Bundy, in particular – are known to have spent weeks in Burns in the lead-up to the protest in an attempt to drum-up support for a hardline protest, with limited success.

There is little evidence of locals joining their occupation. Instead, they appear to have drawn a motley crowd of rightwingers.

On Monday the Guardian revealed that the militia includes Jon Ritzheimer, a former US marine and notorious anti-Muslim protester who has reportedly been on the radar of the FBI due to his incendiary online provocations.

Bundy said he did not know how long his sons would remain in the area or how long the standoff would continue. “I want to be there,” he said, adding that he was baffled that the local schools had cancelled classes for the week in light of the armed standoff.

“I’d go visit with the sheriff and the school officials and tell them what’s on my mind. I’d say, ‘Why shut the school down? That’s just fear-mongering.’

“There is no indication that this is anything other than a peaceful protest,” he added.