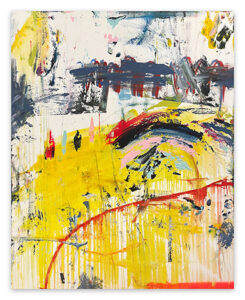 Bailey Contemporary Arts Center (BACA) is proud to present a solo exhibition by acclaimed South Florida visual artist Tommaso Fattovich. The works included in Abstract Punk spotlight dynamics of pigmentation and energy and are open to interpretation by the viewer. The opening reception takes place on Friday, March 4, 2022, during Old Town Untapped, from 6 to – 10 p.m.; his artist talk takes place on March 16 at 7 p.m.; and the exhibition runs through May 22, 2022. For more information, www.pompanobeacharts.org

“The paintings of Abstract Punk engage the viewer immediately with their incredible vibrance and color,” said Phyllis Korab, Cultural Affairs Director. “These paintings bring abstraction to a level where anyone can understand and relate to what’s being depicted. There’s no need for rationalization–what you see is what it is!”

Fattovich paints with a combination of media using his hands and tools such as plaster trowels to create a textured surface. The artist finds that the most gratifying aspect of his process comes in recognizing when the painting becomes what it was meant to be and allows viewers to continually redefine the work. A self-taught painter, and a self-defined abstract punk, he has always valued self-determinism primarily, and spends his studio time alienating himself from the pull of the outside world in order to create from his most authentic inner source. Fattovich’s powerful compositions, eloquent and raw in their palette and gesture, draw the viewer in to sense the often overlooked, and at times overwhelming, energy all around them in the world. Inviting viewers to delve further into his creative world, his paintings highlight his brush movements, and even his arm gestures, that he uses to brings his powerful compositions to life. 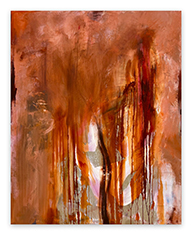 Fattovich describes his early life in Milan, Italy, as his first significant education in the fine arts. His family moved to the United States when Fattovich was in his teens. He continues to draw inspiration from the similarities of both places, as well as the deep contrasts between them. The vast art landscape of the Wynwood Art District in Miami became the backdrop to Fattovich’s first fine art exhibitions beginning in 2010. His work has since been included in exhibitions in Miami, San Francisco, Palm Springs, Los Angeles, Las Vegas, Boca Raton, East Hampton, as well as his first solo show in New York at CJ One Gallery in 2021. The artist currently lives and works in Boca Raton, Florida.

The exhibition is free and open to the public.

Bailey Contemporary Arts Center (BaCA) is proud to present an exhibition by acclaimed artist Andrea Huffman. Listening to the Sky showcases the birds of Florida and the environmental impact on the local avian population through Huffman’s stunning prints and fiber art works. There will be an opening reception during Old Town Untapped on December 3, from 6pm -10 pm, and multiple community art events during the exhibition’s run through February 23, 2022. For more information, www.pompanobeacharts.org […]

Pompano Beach Arts is proud to announce that television icon Malcolm-Jamal Warner is joining the fourth annual Exit 36 Slam Poetry Festival as a celebrity judge. The famed star of The Cosby Show and current hit The Resident will also be performing his poetry at the festival and sharing thoughts about his career during an Artist Talk. The three-day event attracts the premier spoken word artists in the country and will take place December 9-11, 2021, at the City’s cultural venues. Event details and in-person and virtual tickets are available at www.pompanobeacharts.org/exit-36. […]

Pompano Beach Arts is proud to announce the City’s inaugural Jazz Fest, featuring a dynamic lineup of music icons. The star-studded festival kicks off at The Great Lawn along the beach for an evening concert with ten-time Grammy® Award-winner Arturo Sandoval on Friday, January 28, 2022 at 8 pm. Day two is an immersive musical extravaganza at the Pompano Beach Cultural Center. During the afternoon, the center’s ArtsPlaza will be filled with the sounds of legendary artists including Sammy Figueroa, Bryan Lynch, Magela Herrera, Ashley Pezzotti, in addition to emerging and student artists under the direction of Grammy Award-winning professor Dr. Ed Calle. In the evening, Grammy® and Tony® Award-winner, singer Dee Dee Bridgewater, takes the stage inside the center’s theater.  Jazz Fest Pompano Beach is a partnership with KCC Productions, a well-known concert and festival production company. Ticket information at www.pompanobeacharts.org/jazzfest […]