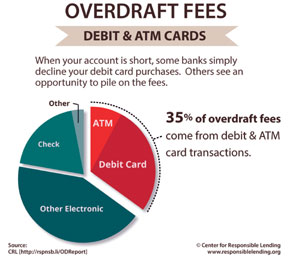 This chart shows how consumer checking accounts are affected by overdraft fees.

Fees deducted from millions of consumer checking accounts are making legal and financial news in early 2016. Banks are reaping billions of dollars on just one fee: overdraft.

A new analysis by SNL Financial and CNN Money found that the nation’s three largest banks together collected more than six billion dollars in overdraft fees last year. The analysis became possible due to new bank disclosures that went into effect last year.

Secondly, by Jan. 22, 2016 final federal court approval is expected on a proposed $24 million settlement of a 2010 lawsuit that challenged how Bancorp South posted the order of consumer transactions. The suit alleged that bank customers were charged overdraft fees even when their accounts had sufficient funds to avoid the fees. To maximize fees, the bank re-ordered consumers’ trans-actions so that accounts would be depleted more quickly and result in more transactions posted against a negative balance. Instead of a single over-draft fee being charged, the re-ordered postings led to multiple fees. The bank practice also resulted in inaccurate balances for customers searching for balances online.

The recent settlement marks the latest in a long line of law-suits based on banks’ attempts to maximize overdraft revenue through unfair posting practices.

The Center for Responsible Lending (CRL) has noted that those hardest hit by overdraft fees included consumers of color, seniors, young adults, military families and those earning $50,000 or less.

In a 2015 report, CRL concluded that “Abusive overdraft programs drive consumers out of the banking system; indeed they are the leading reason consumers lose their checking accounts.”

In other research, the Consumer Financial Protect Bureau (CFPB) found that the bulk of overdraft fees are incurred through either ATM or debit card transactions. The typical $34 fee translates into an annual percentage rate of 17,000 percent. And an earlier 2013 CRL research report stated:

“Typically, the overdraft fee is nearly twice the size of the debit card overdraft itself. This is particularly striking since transactions on debit cards can be declined at no cost to the consumer, when the account lacks sufficient funds.”

The bottom line is that many consumers’ are seeing their earnings siphoned away by un-fair overdraft practices.

To improve household finances, consumers should consider drop out of their bank’s overdraft program. It’s easier and far cheaper for a transaction to be declined than to be charged more in interest and fees than the original transaction.

The CFPB is considering establishing rules to address overdraft practices. Consumer advocates are pushing for rules that will limit the size and frequency of these fees.

“Overdraft fees continue to take a toll on many households, sometimes pushing them out of the banking system altogether,” noted Rachel Anderson, CRL’s director of faith affairs. “When bank systems maximize over-drafts at the expense of their customers, it’s simply unconscionable.”