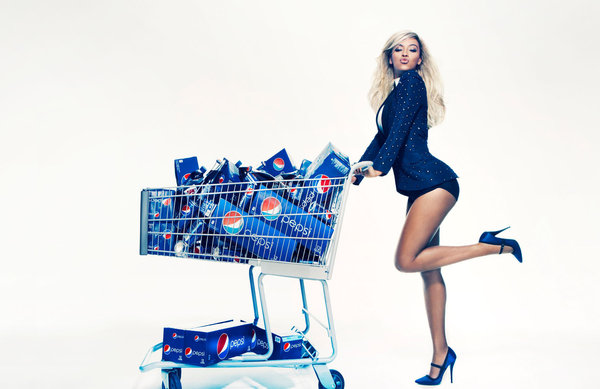 When Beyoncé makes her return to music at the top of next year, the multi-platinum will be armed with a major backer: Pepsi.

PepsiCo, the conglomerate best known for its soft drinks, announced it has inked a deal with the multi-platinum singer.

The deal — reportedly worth $50 million — is being touted as a “true creative and wide-ranging global collaboration.”

But what exactly does it mean?

Fans can expect Beyoncé, who has already appeared in five Pepsi campaigns since 2002, to be featured in a new TV spot for the soft drink. Her face will also be plastered on a limited-edition line of soda cans and bottles and her likeness will also be visible on in-store displays, promotions and advertising at Pepsi retailers — so get ready to see her practically everywhere in the new year.

More importantly, as previously reported, the singer will headline the Pepsi-sponsored halftime show at Super BowlXLVII in February.

Beyoncé’s Super Bowl performance is expected to be the launching pad for new music and Pepsi will play an integral role in the rollout for her upcoming project. Pepsi is expected to promote a 2013 tour from the singer.

The company also announced they would fund other creative projects of Beyoncé’s, whether they have any connection to the brand or not. The New York Times reports the bulk of the $50 million will go toward media placements and global promotions, with the remainder split roughly equally between the singer’s fee and the fund to develop other Beyoncé-branded projects.

“Pepsi embraces creativity and understands that artists evolve,” the singer said in a statement to the New York Times, who first reported the multi-year deal. “As a businesswoman, this allows me to work with a lifestyle brand with no compromise and without sacrificing my creativity.”

It’s safe to say Beyonce is happy that President Barack Obama was re-elected last night. After the fundraisers, the Obama earring, the letter of support she penned to the President — and the fact she shared her absentee ballot that […]