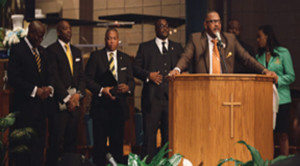 Evoking excerpts from some of Dr. King’s most memorable speeches as well as quoting scripture, Bishop Curry challenged the community to honor Dr. King by continuing his legacy of unending commitment in the struggle for equal rights and socio-economic reciprocity through registering to vote and exercising their right to vote during this upcoming presidential election cycle.

Bishop Curry quoted scripture taken from the Book of Genesis Chapter 37 Verse 5 and Verses 18-20. “And Joseph dreamed a dream. And he told his brethren and they hated him yet the more. Verse 18 says ‘and when they saw him afar off even before he came nearer unto them they conspired against him to slay him. They said one to another behold this dreamer cometh. Come now therefore let us sleigh him and cast him into some pit. We will say some evil beast had devoured him. And we shall see what will become of his dreams.”

Bishop Curry titled his sermon, Behold the Dreamer Cometh; Let Us Sleigh Him and See What Will Become of His Dream.

Throughout Bishop Curry’s sermon he touched upon a number of socio-economic issues ranging from the disparity in the incarceration rates between Blacks and whites, pointing out that Blacks were targeted far more often by law enforcement and received lengthier sentences than their white male counterparts. He also listed similar disparities between Blacks and whites economically, pointing out the lack of opportunities across the board when it came to Blacks living in America.

Bishop Curry said that Blacks should be selective when exercising who and what they spend their money on, bearing in mind that their economic impact could sway public opinion as well as public policy. In addition, he stated that one of the greatest tools Blacks could use was the power of the ballot.

Bishop Curry cited the fact that Blacks had made individual gains, including having two Black Secretary’s of State, two Black Attorney Generals, and the election of a Black President for two terms; collectively Blacks were greatly subjugated on a broad socio-economic scale. He paraphrased Dr. King’s message of the struggle by Blacks toward equality then as in now, with a great deal of work yet undone.

“If you listen to what Dr. King said and you listen with your 21st century ears, you’ll hear Dr. King saying but 100 years later the Negro is still languished in the corners of American society and finds himself in exile in his own land. So we’ve come here today to dramatize this shameful condition. In a sense we’ve come to our nation’s capital to cash a check. When the architects of our Republic wrote the magnificent words of the Constitution and the Declaration of Independence it was signing a promissory note to which every American was to forbear And this promissory note was a promise that all men, yes Black men as well as white men, would be guaranteed the inalienable right of liberty, and the pursuit of happiness. It is obvious today that America has defaulted on this promissory note as far as her citizens of color are concerned.

“Instead of honoring this sacred obligation, America has given the Negro people a bad check, a check which has come back marked insufficient funds. But we refuse to believe that the bank of justice is bankrupt. We refuse to believe that there are insufficient funds in the bank full of opportunity for this nation. So we’ve come to cash this check; a check that will give us above this land the riches of freedom and the security of justice,” concluded Bishop Curry.

Alpha Man Atty. Raleigh Rawls, 90, began practicing law in in Broward County from Oct. 1, 1957 until Sept. 30, 2015. “Dr. King set a standard contributing to the Black man’s advancement in this country that will be hard to overcome but it would be a good thing for us to follow his philosophy. It is important to keep his dream alive because he set good standards for us to live by and for us to progress. So I would say to our young people, please follow Dr. King’s advice.”

Matthew Bradford, district director, Florida Federation of Alpha Chapters, presiding, served as the MLK Service Master of Ceremony. He pointed out the fact that Dr. King was not originally going to ad-dress a gathering in Memphis due to falling ill the night before. He sent a number of pastors to speak before them; however they insisted upon hearing from Dr. King. He got up off his sick bed and returned to deliver one of his most prolific speeches, commonly referred to as “The Mountain Top Speech,” in which he foreshadowed his death. Bradford paraphrased Dr. King.

“Again he (King) had unfinished business in Memphis so he rallied the troops and said we’ve got to go back. Reschedule a time for us to march because we have to get this march done because of the way these sanitation workers were being treated in Memphis. It was fueled by the fact that the workers were actually killed as a result of having to drive substandard trucks on the job.

“Amazing to say the least was what God gave him as far as a divine understanding of his work. I really want you to understand the burden that this young man had. Not only was he doing this for those less fortunate but he was doing this for an entire world,” Bradford added.

The MLK Service also commemorated the 40th year that Black males in the Men of Tomorrow Mentoring (MOT) Program, founded by the late Alpha Man Ronald Dehart, were recognized.