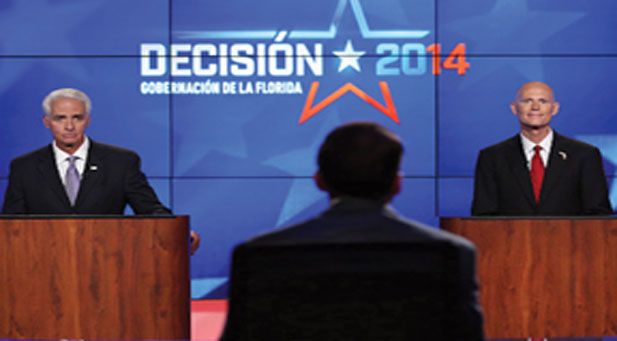 Sure, it was the seven minute delay at the start of the gubernatorial debate that got most of the attention.

The incident caused some to conjure up the moniker, “Fan Gate,” to inject humor into an otherwise bland, uninspired political moment. And the entire affair left Black Americans empty and wanting.

Consequently, in the after-math, people of color offered some interesting perspectives on the debate.

“I left thinking that the candidates don’t really like or respect each other,” said Miami Gardens Mayor Oliver Gilbert III. “There appears to be a real choice P, philosophically and stylistically.”

The choice depends on the voter. Even that raises a serious question, especially since Democrats outnumber Republicans among registered voters in Florida.

“I saw only a small portion of the debate,” said Mary Sims McCall, a Miami native living in Seminole County. “They say Crist had the upper hand, I think voters already know who they will vote for.”

Such a statement carries merit among many. Some even say the winner has already been determined, which is why voter turnout has so many people on edge with anticipation.

Granted, Scott’s two million dollar war chest does bear a bit of a daunting economic challenge for Crist, who has amassed far less with some one million dollars.

“Aside from the fan incident, the only take that I got from the debate was it wasn’t fantastic, pun intended,” said Westside Gazette Publisher Bobby R. Henry, Sr.

“But I do believe Charlie Crist did have a wind aided victory, if you would, in spite of all the profaning. If this is any indication of what we should expect from Charlie, then let the fans blow and allow Florida to be blown Scott free.”

No doubt Democrats are hell bent on ousting Scott, who has done little more than tout the more than 500,000 he claims to have help create during his term in office. That is, as Scott repeatedly reminds the media and public, is what he promised to do.

Conversely, there are those who say even more jobs could have been created had he embraced the expanded state Medicaid program under the Affordable Health Care Act (Obamacare).

And there is the matter of the proposed minimum wage increase to $10, which Scott opposes under the premise that the result would be massive lay-offs and fewer new jobs created.

That appears to confirm the allegations leveled at Scott accusing him of serving the interest of the wealthy individuals and large corporations.

“Scott still doesn’t get it. He’s still trying to run the state like a business and you can’t do that. Government is different. Your responsibility in the state of Florida is getting people served.