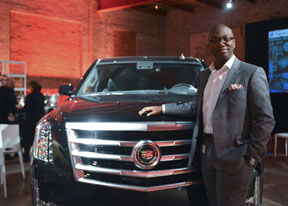 WASHINGTON (NNPA) – If you’re driving down a highway, street or tunnel anywhere in North America and you see the shimmering new headlights on the latest Cadillac, Chevrolet, GMC or Buick approaching you, there’s a good chance you’re seeing the work of Martin Davis, a talented, young African American designer who works for General Motors.

Davis traces his love for design and innovation back to elementary school. He didn’t like Hot Wheels and the Lego sets that he owned weren’t intricate enough to hold his attention, even at five years old. He found that he didn’t like any of the toys sold in the stores, so he started making his own.

The Detroit-area native started collecting empty card-board boxes that were used for transporting fruits and vegetables from the grocery store, bringing them home and just started cutting. He molded shapes with glue, tape and construction paper. There was a small closet in the entryway of his parents’ house, just big enough for a chair and his creations: interior designs for a car including a dashboard and center console. Then he invited all of his friends over to “test drive” the car. He rolled out a new model about once a month.

His father, then an employee at Ford Motor Company’s stamping plant in Dearborn, Mich., shut down young Mar-tin’s burgeoning auto operation fearing that letting the neighborhood kids play with card-board in their closet presented a safety hazard.

That didn’t stop him from sharing his talent for design with others, including his father’s employer.

“One day I decided to send my sketches into Ford. I was still in middle school. I found an address to Ford in some magazine and put a few of my drawings in an envelope and put it in the mail,” Davis explained. “I didn’t tell my parents anything.”

A few months went by, and the young designer began to lose hope and figured that nothing would come of his letter. Then one day after school when he got home, his brother was waving a piece of paper at him.

“’This guy from Ford called you. Here’s his number and he wants you to call back,’” Davis recalled his older brother saying.

So Davis anxiously dialed the number and the Ford employee who answered thanked him for his interests and told him that he sent the drawings over to the design department, and that someone would get in contact with him.

He received a follow-up letter from the design department with some career advice and a list of schools.

The list of schools included his eventual choice. Following the advice that he received from Ford, while still in middle school he set his mind to attending the College for Creative Studies (CCS) in downtown Detroit.

After he graduated from CCS, he applied to a number of companies. At one point he believed that he would follow in his father’s footsteps at Ford, but despite earlier interest in the middle schooler’s work, he never got an offer from the company.

But he did get an offer from GM.

“My time at GM has been amazing,” said Davis. “I couldn’t have imagined it being better.”

Davis admitted his first day on the job was nerve-racking, and it took him awhile to find his way around the mammoth GM complex.

“I remembered sitting at my desk that first day looking around at all designers thinking, ‘How am I going to compete with all of them?” said Davis.

But the young designer did compete, gaining confidence with every completed sketch. Davis’ work began to catch eyes of the design managers and they started selecting his sketches among dozens plastered on the 20-foot wall in his studio at GM.

“The early days were a lot of fun,” said Davis. “There was a freeness. I remember doing sketches for the 2004 Oldsmobile show car, the last show car they did.”

One of his sketches was selected as the theme sketch for the car. That Oldsmobile show car would be built at the world-famous, now defunct Gruppo Bertone design house in Italy.

Even though Davis wasn’t selected to join GM designers in Italy, he didn’t sit on the sidelines for long.

A few months later, as the end of his first year with GM approached, the auto company gave him the opportunity to travel to Birmingham, England to work at an advanced design studio that primarily focused on Cadillacs. There he worked on the Cadillac Cien, a two-seater, mid-engine concept car.

“It was a really great experience to work on such a high-profile concept car,” said Davis.

After the two-year stint in Birmingham, the Detroit area native worked on a number of production programs, including the GMC Acadia and the auto company’s Cadillac group in China.

When Davis returned to the United States, company executives were having ongoing discussions about GM’s exterior lighting designs compared to some of their competitors.

Davis said that as the conversations were happening about the direction of the new project wholly-focused on exterior lighting, he jumped at the opportunity and volunteered to do it.

“It was almost like a huge experiment,” said Davis. “We never had a dedicated, exterior lighting design studio, but we wanted better lights, so we said, “let’s see how this work.’”

Davis and his team took on the exterior lighting responsibilities for three well-known “programs”: the GMC Acadia Chevy Traverse and the Buick Enclave.

Management immediately recognized how valuable having dedicated focus on lighting could be.

“Not long after that they made it an official studio and made me the first manager of that studio in 2012,” said Davis. “That was really cool.”

Davis said that he still loves to draw, but in his current position he’s more like the conductor of an orchestra than an individual musician.

“I don’t have an instrument. My team has all of the instruments they need and I have to remember that,” said Davis. “Now my job is to make sure that my team knows where each brand is going and understands how to use technology to create a design that is appropriately styled to the character of each vehicle.”

At first some designers of GM’s other brands were apprehensive about giving up that much control of a central element in the cars overall style. Now, Davis said all of them want his team’s designs.

Ed Welburn, GM’s vice president of Global Design, praised Davis and his team for their creativity.

“Martin is doing a phenomenal job,” said Welburn. “Lighting on that [Cadillac CTS] is so striking. It wasn’t too many years ago that every headlight was either round or rectangular. Now lighting is so much a character of the car. It really is the eyes of the vehicle. Our organization is really dependent on Martin.”

Davis said educators, parents and support groups first have to raise awareness among students of color about opportunities in science, technology, engineering and mathematics (STEM) careers and then help them to understand that they can also excel in those professions.

The GM design manager mentors children in the Detroit metro area and recommended that all students get focused at a young age and seek educational and career development programs that can assist them with achieving their goals. Davis added that his presence in the automotive design field shows students, especially students who look like him, that they can also be successful in that field.

“I think that goes a long way,” he said.

And Davis has come a long way, too.

“It almost feels like a dream that I have this responsibility,” said Davis. “You think of [General Motors’] history, this 100-year-old company that’s been making cars forever and now there’s this opportunity to shift focus to another part of the vehicle, a part of the vehicle’s face, the face of each brand. It’s a humbling experience. I really do appreciate the privilege and the opportunity to fulfill this role.”

What Will You Do??

I join in solidarity with the 11-year- old girl known as Little Miss Flint who told you that spending $5 billion to make water safe is a much better way to protect Americans than building the wall. […]