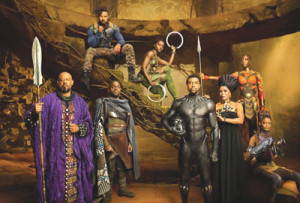 This movie was well received by those who saw it, but there also were social media trolls who claimed false attacks. One person posted a picture on twitter of a bloodied woman with the caption: “i went to see #BlackPanther with my gf and a Black teenager shouted “u at the wrong theatre” and smashed a bottle on her face.” This has proven to be a lie, and the picture that was posted was a 19-year-old Swedish girl who was attacked by a man at a nightclub in Malmö after refusing his advances. Another person tweeted a picture of Rob Porter’s ex-wife with a black eye with the caption: “Went to the #BlackPanther premier tonight and my wife was assaulted. Three Black women approached us and one said ‘This movie ain’t for you white b****’ and then attacked her. Security escorted us to the parking lot and we left. We just wanted to see a movie.” These were deliberate attacks on Blacks trying to portray them as savages. Many users have called out and reported these false attacks and many of these accounts have been suspended. It is a low and cheap tactic to take pictures of assault victims from unrelated incidents and deliberately blame imaginary Blacks for the attack. Does the movie bother you that much?

What is it about a Black super hero movie that causes this much uproar? The sight of seeing Blacks in a positive light is raging up anger inside for some. Most of the movies and TV shows feature an all-White cast and most of the Marvel super heroes are white. It is refreshing to see Blacks in positive roles instead of the same stereotypical ones. I will encourage everyone to see this movie. Not only is it a good Marvel movie but a great overall movie. I encourage the Black community to head to a theatre and see it, and support Black excellence with the power of the dollar. One of the most powerful tools at your disposal is the green pieces of paper you carry around every day. Let Hollywood know that we would like to see more Black positivity.

Three icons of their respective industries were honored at the National Newspaper Publishers Association’s annual Torch Awards dinner at The Dupont Circle Hotel in Washington, D.C.