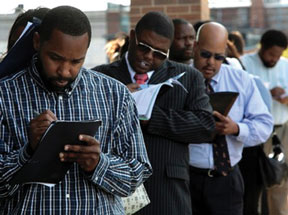 WASHINGTON (NNPA) – The unemployment rate for Blacks fell from 11.4 percent to 11 percent and the labor force participation increased from 61 percent in August to 61.7 percent in September, largely because of short-term gains made by Black men, according to the latest jobs report from the Labor Department.

Even though the unemployment rate for Black men over 20 years old increased from 10.8 percent to 11 percent last month, the share of Black men that were employed or looking for work (labor force participation rate) also increased from 67.3 percent in August to 68.5 percent in September. The only worker group that saw its labor force participation rate increase last month was Black men. Economists often say that people return to the workforce, as they grow more optimistic about their job prospects.

Although the unemployment rate for White men over 20 years old fell from 4.8 in August to 4.4 percent in September, the labor force rate for that worker group also ticked down from 72.2 percent in August to 71.9 percent last month.

The jobless rate for Black women over 20 years old plummeted a full percentage point from 10.6 percent in August to 9.6 percent in September. The unemployment rate for White women remained flat at 4.8 percent. There were slightly less Black and White women employed or looking for work in September than the previous month.

The national unemployment rate hit a six-year low last month, falling from 6.1 percent in August to 5.9 percent in September and more than 200,000 jobs were added to the economy.

As some economists cheered September’s jobs numbers, in a blog post on the Economic Policy Institute’s website, Elise Gould, a senior economist and director of health and policy research at EPI, pointed out that the national labor force participation rate was 62.7 percent, the lowest participation rate recorded since February 1978.

“And, the biggest drop in labor force participation was among prime-age workers, 25-54 years old,” said Gould.

In a separate blog post, Gould said that public sector employment gained 12,000 jobs, most of it coming in local government education (6,700). Any increases in K-12 education jobs greatly benefits White women who hold the lion’s share of teaching positions at that level.

The economy added 236,000 jobs in September and revisions to Labor Department numbers in July and August accounted for an additional 69,000 jobs.

During a speech at a steel plant in Princeton, Ind., President Barack Obama praised the slowly improving economy while noting that, “too many families still work too many hours with too little to show for it.”

President Obama said that increasing the minimum wage is one of the best ways to grow jobs and wages in America.

“It’s time to stop punishing some of the hardest-working Americans.  It’s time to raise the minimum wage.  It would put more money in workers’ pockets.  It would help 28 million Americans. Recent surveys show that a majority of small business owners support a gradual increase to $10.10 an hour,” said President Obama. “The folks who keep blocking a minimum wage increase are running out of excuses.”

Raising the minimum wage would disproportionately benefit Blacks, who hold low-wage jobs at higher rates than their total share of the workforce.

As Blacks continue to struggle with double-digit unemployment, some economists believe that Blacks are being left behind during the economic recovery.

“Rather than just reading about our recovery in a headline, more people will feel it in their own lives.  And that’s when America does best,” said President Obama. “ We do better when the middle class does better, and when more Americans have their way to climb into the middle class.”

Where is today’s Madam C.J. Walker?