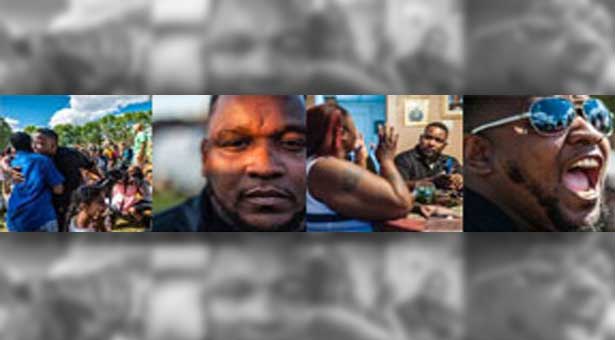 In August the city’s murder rate reached 85, one killing shy of the overall total in 2014. Sadly, some African American residents expect murders to reach 100 by year’s end. Lowe said his sojourn to Chi-Town in Au-gust was divine intervention: God told him to walk to Chicago to bring attention to the callous gang-infused gun violence in Milwaukee.

So he did. “I had to walk to Chicago,” Lowe told the Urban News Service. “It took me three days, my feet were sore, but we don’t pay enough attention to Black-on-Black crime so I walked to find solutions to these senseless acts of violence.”

Lowe walked from Milwaukee City Hall to Chicago City Hall and spoke with folks along the way. His goal is to start a citywide conversation and find solutions to help reduce the Black-on-Black violence in Milwaukee one step at a time.

“Forrest Gump didn’t have a reason when he was running,” Lowe said “he just started running. We don’t address Black-on-Black crime with the same intensity as racial injustice,” he added. “But we need to because it’s destroying our communities. So I prayed and asked for solutions and God told me to walk to Chicago.”

“I’m working 24-7,” Lowe said. “When people call for help, I answer.” He says he’s counseled almost every family in Milwaukee who has experienced a relative dying from gun violence. “Mothers call me when their sons have been shot,” Lowe said. “For some Black people, there is no way out. It’s hopelessness throughout our community. Unemployment creates an environment for violence. We have to stop the violence but we must also address the root causes for the violence.”

Lowe recently was asked to speak in a community park where Tracolli Surveyor was just 17 years old when he was gunned down near 84rd Street on Dec. 10, 2014.  His mother said a gang member shot Tracolli even though Tracolli didn’t belong to a gang. Local officials renamed the park, “Tracolli Peace Park.”

Lowe stood before dozens of school-age children and offered brief inspirational words about getting a good education and obeying their parents. He carries his own bullhorn wherever he goes because he said he wants to make sure his message is heard.

Families and friends in two neighborhoods last month held vigils for the latest victims of Milwaukee’s escalating gun violence. One for 13-year-old Giovanni Cameron, who was shot to death by his 13-year-old cousin; another for 14-year-old Tariq Akbar, gunned down by a 15-year-old. Ten people were shot in just one week.

“What goes through my mind is, how in the name of all that is good and holy do I have a 15 year old carrying a semiautomatic pistol of high quality — and using it with impunity,” Milwaukee Police Chief Edward Flynn told CBS News. Flynn says the rising gun violence is a result of gun laws that allow people to carry concealed weapons and allow guns to be resold without background checks, Black teenagers living in poverty and an overburdened juvenile justice system. “Right now our offending community recognizes that it’s more dangerous to get caught without their gun than with their gun,” Flynn said, “I think we have a critical mass of offenders who’ve caught on to the weaknesses of the law, and they’re certainly taking advantage of it.”

Flynn said that gunfire has become so common in Milwaukee that 80 percent of gunshots don’t even get reported. For Tory Lowe, the senseless violence has to stop. He views himself is a one-man crusade against gun violence in the Black community and said he walked to Chicago alone because he felt a sense of urgency.  “You would be hard pressed in Milwaukee to find a 19-year-old Black man who doesn’t have a felony,” Lowe said. “Milwaukee is the worst place in America for Black men. I don’t know how it got this way, but it has to change.”

This year, the trade group will commemorate the 190th anniversary of the launch of the Black Press […]