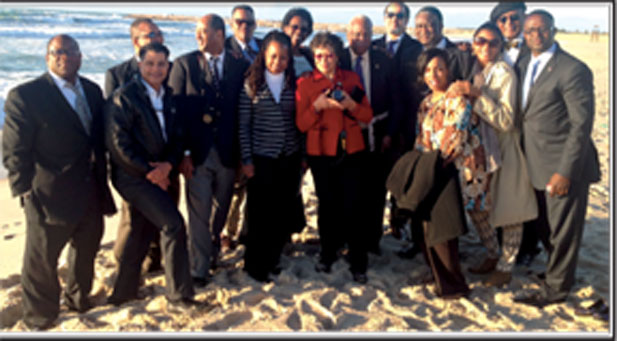 Black Press attacked for efforts to strengthen ties with Africa

Special to the NNPA from the Arizona Informant

Black media critic Richard Prince has launched a series of attacks on a National News-paper Publishers Association-led delegation for a trip to Morocco in early January paid for by the government, writing under one headline, “Black-Press Visitors to Morocco Called Pawns.”

Prince, who has spent all of his professional career with White-owned newspapers, made only a passing reference to Israel’s practice of funding trips for U.S. journalists and dignitaries.

Prince strongly criticized the 14-member delegation for taking the all-expense paid trip because journalistic standards prohibit such trips. However, in a major disservice to Black media, he neglected to point out that the Black Press does not have anywhere near the same resources as the White media and therefore should not be held to the same standard.

A study by Nielsen, for example, titled, “Resilient, Receptive and Relevant: The African-American Consumer 2013 Report,” stated: “Advertising expenditures geared specifically toward Black audiences reflected only three percent of advertising dollars spent. Advertisers spent $75 billion on television, radio, internet, and magazine ads in 2012, with only $2.24 billion of that spent with media focused on Black audiences.”

Even the tobacco industry, which admits to disproportionately targeting the Black Press as part of its marketing efforts to reach young Black customers, recently agreed to a proposed settlement with the Justice Department valued at $30 million-$45 million that would not place a newspaper or magazine ad or TV or radio commercial with any Black-owned companies. The settlement is being challenged in court by the National Newspaper Publishers Association (NNPA), National Association of Black Owned Broadcasters (NABOB), the NAACP and other groups.

In one article, Prince quoted the travel policies of such news organizations as the New York Times and the Washington Post, which have significantly more financial resources than the Black Press.

“Of course, we understand that it is preferable that we pay our own way on such trips,” said NNPA Chairman Cloves C. Campbell, Jr. “But since we’re not getting our fair share of ad dollars and therefore don’t have the resources to pay for the trips, we have to come up with creative ways of covering Africa because the Motherland is too important for us to ignore.”

Africa is so important that seven of the 10 fastest-growing economies in the world are in Africa – Ethiopia, Mozambique, Tanzania, Congo, Ghana, Zambia and Nigeria.

Prince published pictures of the delegation in the southern province of Dakhla and a photo of NNPA News Service Editor-in-Chief George E. Curry near the Hassan II Mosque in Casablanca, crediting the wrong photographer in both cases.

Prince quoted a representative of Morocco’s opponent in the ongoing dispute over Wes-tern Sahara but did not quote anyone from the Moroccan government. Morocco claims the land as part of its country and proposes that it remain part of the country but retain its own autonomy, a position contested by neighboring Algeria through the Polisario Front.

The Popular Front for the Liberation of Saguia el Hamra and Rio de Oro (Polisario), an organization that has sought independence for the former Spanish territory since 1973, has called for a referendum that will offer residents the choice between autonomy or independence from Morocco.

Prince wrote, “…Ahmed Boukhari, the Polisario’s representative to the U.N., told Journalists that Morocco’s bankrolling of the Black-press trip had ulterior motives.

“’In my opinion [it] is a trip politically motivated and with political objectives related to Western Sahara. Morocco’s credibility has been stained these last years as a consequence of human rights violations in Western Sahara,’ he said. ‘Journalists who are not well informed about what is going on in Western Sahara and sensitive to a good reception could be used as a propaganda tool. In any case, any journalist of this group could and in my opinion must be authorized by Morocco to enter into contact with Saharawi human rights defenders.’”

However, as NNPA Chairman Campbell stated, “No limitations have been placed on what we can write or discuss and we’re under no obligation to write anything.” He said the journalists need not seek or need permission from the government to interview Moroccans.

Campbell also rejected the back-handed charge that journalists who went on the trip “are not well informed about what is going on in Western Sahara” or that they “could be used as a propaganda tool.”

“The journalists who went on the trip are probably better informed about that region than most White journalists,” Campbell stated.

The U.S. State Department noted, “In 1988 Morocco and the Polisario agreed to settle the sovereignty dispute by referendum. The parties did not resolve disagreements over voter eligibility and which options for self-determination (integration, independence, or something in between) should be on the ballot; consequently, a referendum never took place.”

In an interview, Curry took issue with the idea that Black journalists may have been duped.

“I am disappointed, but not surprised that Richard [Prince] would even raise that issue prior to seeing anything we have written,” he said. “Naturally, we will tell both sides of this story.”

Curry, a former Washington correspondent and New York bureau chief for the Chicago Tribune and former editor-in-chief of Emerge magazine, said Prince could have looked at his series on China last year to know that he is not gullible.

Although that trip was financed by a private Chinese foundation instead of the government, Curry wrote an article under the headline, “China in Denial about its Race Problem.”

In another article, he wrote: “More recently, widespread concerns have been voiced about the alleged computer hacking of U.S. companies, including the New York Times, by Chinese military units – charges that Chinese officials strongly deny – have raised concerns about what kind of partner China will be to the U.S.

“In unusually blunt language, Thomas E. Donilon, President Obama’s national security adviser, said in a speech Monday to the Asia Society in New York: ‘Increasingly, U.S. businesses are speaking out about their concerns about sophisticated, targeted theft of confidential business information and propriety technologies through cyber-intrusions on an unprecedented scale.’”

If you went by the tone of Prince’s coverage, you would think that the Black journalists had visited a pariah nation, such as South Africa under apartheid instead of the United States’ oldest ally – the first country to formally recognize U.S. independence.

You also would not have known that President Obama recently hosted Morocco King Mohammed VI. In a joint statement issued afterward, they said: “In their meeting today at the White House, President Obama and His Majesty King Mohammed VI reaffirmed the strong and mutually beneficial partnership and strategic alliance between the United States and the Kingdom of Morocco.”

It also noted, “The President commended the action and the leadership of His Majesty the King in deepening democracy and promoting economic progress and human development during the past decade.”

Campbell, chairman of the NNPA, declared, “We are going to continue taking trips to Africa, regardless of what anyone writes. We openly acknowledge who funds our trips and trust that our readers are intelligent enough to know if we are presenting news that is fair to each side.”