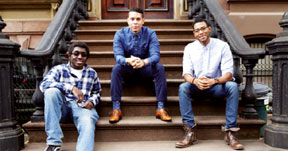 Jordan Kunzika is a 21-year-old computer genius who says he often was the only Black person in his computer science classes. He is a Google Generation Scholar and has done internships with both Microsoft and Intel.

But recently, when Microsoft and Google offered him a full-time job, he turned them down, and decided instead to partner with his friends, Brian Gerrard and Justin Gerrard, to create a new app. That app is called Bae, and it’s a very popular mobile dating app for Black people around the world.

Kunzika told TechCrunch, “I was honored to get full-time offers from Microsoft and Google before even turning 21, but I knew that I could serve a higher calling to represent a paradigm shift in what a tech entrepreneur could look like.”

The three friends were very determined to build and promote their app, and so in April 2015, they launched a grassroots campaign and hosted a nationwide tour. The tour, which took them to several Historically Black Colleges across the country, consisted of several parties and mixers where people who matched on Bae could meet each other in person. Anyone who wanted to attend had to first download the app. Within just a few weeks, they had al-ready reached 17,000 down-loads, and since then they have reached more than 200,000 downloads.

What makes their app different?

There are many other dating apps, but Kunzika says he de-signed a proprietary algorithm that his makes their app very unique. He explains, “What users like the most about Bae is the quality of the matches and that it helps you find those you’re most interested in”. For example, if you prefer to find someone who went to a similar school as you, the app will adapt to your preferences and learn your user behavior.

Their goal is for Bae to be-come the best Black dating app in the U.S., in Africa, and in the Caribbean. And so far, they are off to a great start! They have already been listed as a Top 50 Lifestyle app in twenty different African and Caribbean countries, and the app was recently accepted into Facebook’s FbStart Accelerate program and chosen as one of a select group of companies to present at Facebook’s upcoming Developer conference. The app also won first place at Tech-Crunch’s recent Brooklyn meet-up and pitch-off event.

For more details about the Bae app, visit www.baeapp.com

Where do we go from here? We must get on the BUS!

A Message From Our Publisher  Where do we go from here? We must get on the BUS! But whoever has the world’s goods, and sees his brother in need and closes his heart against him, […]

Baldwin documentary ‘I Am Not Your Negro’ receives Oscar nod

Baldwin documentary ‘I Am Not Your Negro’ receives Oscar nod