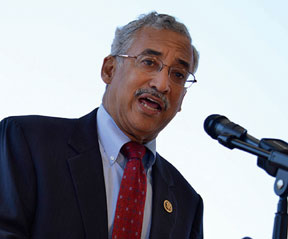 Rep. Bobby Scott (D-Va.) said that ensuring that all Americans have the opportunity to make a decent life for themselves and their families is the central challenge of our time. This photo was taken during a forum on criminal justice reform in Northwest Washington, D.C. in July 2015. (Freddie Allen/AMG/NNPA)

Nationally, the economy added 151,000 jobs in August, but the unemployment rate remained steady at 4.9 percent, the same mark set in July and June.

The labor force participation rate, which measures the share of workers that are employed or looking for jobs, was 61.9 percent for Black workers in August, an increase from 61.2 percent in July and only a slight uptick from the Black labor force rate last year (61.7 percent in August 2015). The participation rate for white workers was 62.9 percent in August, July and June and has only edged up slightly since last August (62.6 percent)

The unemployment rate for white workers was 4.4 percent in August, the same mark set in August 2015, and a slight increase from the 4.3 percent rate recorded in July.

The unemployment rate for Hispanic workers was 5.6 percent in August 2016 a step back from the 5.4 percent rate set in July.

According to The Hamilton Project, an economic policy think tank at the Brookings Institution, the economy would need to add 204,000 jobs every month until May 2017 to reach pre-recession employment levels.

In a statement about the August jobs report, Main Street Alliance, a national network of small business coalitions, noted that growth in the retail and restaurant sectors signaled “increased consumer confidence and spending heading into the holiday shopping season.”

The Alliance also reported that Washington State led the nation in small business job growth and Seattle topped the list of metropolitan areas.

“With job creation and small business success widely attributed to consumer confidence and spending, it is hard to ignore Seattle’s rising minimum wage and the role boosting the wages of the lowest-level earners played in earning them the top spot on the list,” the Alliance statement said.

Bill Spriggs, the chief economist for the AFL-CIO, a national group of 56 unions that represents more than 12 million workers, noted gains in fast food jobs and in health care in a series of tweets last Friday.

Spriggs suggested that the Black unemployment rate likely decreased, “for right reasons,” because the employment-population ratio, which is the share of the population that is currently employed. The rate also improved from July (56.1 percent) to August (56.9 percent).

Spriggs also tweeted that Black workers that earn associate degrees experience a 5.4 percent jobless rate, which is only slightly better than the unemployment rate for White high school dropouts (5.6 percent).

In a statement recognizing the importance of Labor Day, Rep. Bobby Scott (D-Va.), said that although America has made significant strides toward an economic recovery in recent years, too many working people are still going without the basic necessities.

“It does not have to be this way,” said Scott. “Ensuring that all Americans have the opportunity to make a decent life for themselves and their families is the central challenge of our time. Whether we rise to meet that challenge will define us for generations to come.”

Because of the work of Rep. Bennie Thompson (D-Miss.), the Evers’ house at 2332 Margaret Walker Alexander Drive in Jackson, will now become a national historic landmark. The house where Medgar Evers’ was fatally shot was built in the first planned middle-class subdivision for African Americans in Mississippi after World War II. Thompson has been working on the honor for Evers for over ten years. […]

A forum designed to address racial and law enforcement issues were offered to the community of Broward by Mitch Ceasar as the leader of the Democratic Party and Sheriff Scott Israel to bring up current racial issues the nation has been facing. […]