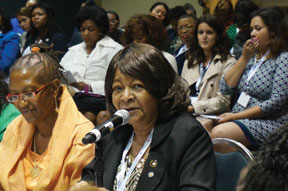 WASHINGTON (NNPA) – As the National Football League continues to grapple with its policies on domestic violence and sexual assault, Black women have stepped forward to ensure the NFL gets it right this time.

On September 15, NFL Commissioner Roger Goodell announced the appointment of a small council to advise the league: the appointees were Lisa Friel, former head of the Sex Crimes Prosecution Unit in the New York County District Attorney’s Office; Jane Randel co-founder of national advocacy group, NO MORE; and Rita Smith, former executive director of the National Coalition Against Domestic Violence.

All three appointees are White in a league that is 66 percent Black.

“We saw that all the people accused and arrested were Black men, yet the victims we always see put on TV are White women. We don’t want to see the league take the approach that their only obligation is to turn players over to the criminal justice system,” says Elsie Scott, director of the Ronald W. Walters Leadership and Public Policy Center at Howard University, and BWR member. Scott has also developed domestic violence trainings for both the NYPD and the National Organization of Black Law Enforcement Executives (NOBLE).

Following the advisory panel announcement, the BWR penned an open letter to NFL Commissioner Roger Goodell to point out the glaring omission, and to request a meeting with him to strategize on domestic and child abuse and “other diversity issues” within the league. The group also launched a campaign to “elevate Black women’s voices” in this discussion via an online petition calling for the immediate inclusion in the advisory group; a social media campaign around the hashtag, #NFLGetItRight; and a letter-writing campaign.

“When we first went [to the meeting], we had to establish that we’re not coming to bash the NFL. There are so many women in our group who love football,” Scott says, citing BWR member Barbara Williams Skinner for example, a former chaplain for the Washington Redskins. “But we want the NFL to know, this is not going to be a ‘get past this’ thing. It has to be a long term approach for changing the league, owners, and players.”

Since then, the league has added Beth Richie to the panel. Richie, who is Black, serves as director of the Institute of Research on Race and Public Policy and professor of criminal justice, and gender and women’s studies at the University of Illinois at Chicago. In addition to hiring Richie, the league has pledged to strengthen ties with domestic violence organizations and provide more resources to owners and team leadership.

“We’re really happy to have her there, and she’s a great representative and has a long history of working for women of color, but we also would like to see practitioners who work directly with Black women victims of assault,” Scott says, highlighting that Richie is primarily a researcher.

(The Roundtable has created a list of recommended expert practitioners for the NFL to consider; this list will only be released directly to the Commissioner).

The league responded to BWR’s request by offering a meeting with vice president of social responsibility, Anna Isaacson, and executive vice president of football operations Troy Vincent; the organization accepted the meeting on the condition that it would be a lead-in to the originally requested meeting with Commissioner Goodell.

“We were very impressed with Vincent,” says Scott, one of the BWR members chosen to attend the meeting. “He’s a Black man, former player, and he felt that Black women should be engaged with this process, as well as Black men. We felt he was very serious and was going to go back with some of the recommendations we put forth.”

Some of those recommendations included improving diversity within the league’s ranks, trainings for owners and league professionals, and reformative help for players who have victimized others.

“What kind of help [is the NFL] providing for these people? We know a lot of people have grown up in violent settings,” says Scott. “We don’t feel society should write off [such players] and tell them they can’t play football anymore, but if you’re using them to make millions of dollars, you have the obligation to enrich them and help them grow and invest in them.”

The BWR also received confirmation that there would be a meeting with the commissioner within 45 days. The group still plans to continue its campaign. On Twitter, its #NFLGetItRight hashtag generated close to 1,000 Tweets in a few hours, and the online petition, hosted at Change.org, stands at more than 5,600 signatures.

At a press conference for the campaign launch (which took place prior to the meeting), several BWR members and affiliates took turns articulating the organization’s concerns. Some chose to share their personal experiences coupled with data. Scholar and former director of the National Council for Negro Women, Avis Jones-DeWeever, shared that as a Black woman survivor, there are racial considerations the panel should be able to address. National Bar Association president, Pamela Means called for diversity in life experience as well as race, and shared that as a teenager, she lost an older sister to domestic violence. And corporate diversity expert René Redwood took a broad view approach, expressing that the systemic problems should be the real focus of the NFL’s effort.

“We want to make sure that Commissioner Goodell, the NFL, and the nation realize that this is not a matter of just the criminal justice system. This is a public health issue. This is an issue where we need to address the individuals, both the men and the women, and the children, in a way of compassion and caring,” she said. “Commissioner Goodell, the owners, and leadership of the NFL teams have an obligation and responsibility to look at their own culture, to look at their own attitudes, and how they perpetuate the violence.”

Praise for new rules on Racial Disparities in schools
[…]